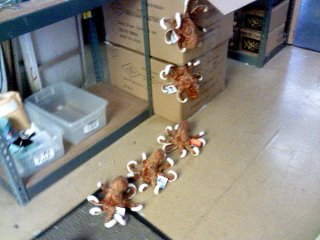 I was making one of my constant vain attempts to clean the apartment when I came across a dog-eared mass market of Danny Sugarman's Jim Morrison memoir No One Here Gets Out Alive. Sugarman passed away in January of 2005, and a little bit of a flash back was all I needed to drop the broom and delay the clean up. Sugarman had the fortune and infamy to have been hanging around with the Doors since he was a mid-teen, and spent a good part of his adult life cashing in on the fact. During the Seventies he was scheduled to do a college reading in San Diego, and the editor of a local music weekly I wrote for at the time gave my name to the events organizer to be  Sugarman's "local poet" opening act.
I didn't care for Sugarman's writing, but there was money in the deal, so I went and did the deal, and found old Danny to be a very nice guy indeed. Not a shred of detectable ego . It was the most enjoyable fifty bucks I've ever earned. I have to say that the least enjoyable fifty bucks I ever earned was having to read No One Here Gets Out Alive for a review for a local underground paper. Even as a young man who hadn't yet outgrown his obsession with the late Morrison's confused poetics and drunk posturing.I thought Sugarman's book was too much of a love letter, a mash note he couldn't stop writing. That said,  I will add that I remember Danny Sugarman being a  super guy, friendly, supportive in my own writing. He bought a copy of a chap book I brought to the reading. Alas. The apartment, you guess rightly, is still cramped with stuff and dusty as ghost town plates.
at July 29, 2012