Dolly wants to kill you 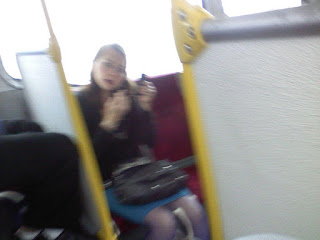 This poem attempts to tell its tale from within a nightmare in progress, the effect being that the verse here, with its rococo imagery and colliding associations between abuse, violence and gossip among dolls and a government's unjustified , illegal, irrational war of choice, is itself incoherent.


For rhythm and sound and general imprecision , Kathryn Levy's poem resembles the worst traits of the otherwise redoubtable Joyce Carol Oates; this is the say that there is an overwhelming strain of professional victimhood, that those harmed in violent communities, whether doll or actual, or who suffer due to occupying armies, drone strikes, destruction of destruction of infra structure and the local economy, have in some sense volunteered for their pathetic stations, that the unstable social forces around them have conjured up a seductive, pervasive and persuasive rhetoric with art, news coverage, entertainment, class envy and saturation advertising that great sacrifices are required for the righteousness of our way of life to survive and to again flourish mightily as it is claimed it had in some hazily described Golden Age.
I am not a fan of the poem--again, Levy's tone is neither rhythmic or smooth nor effectively jagged as, say, Robert Creely's "I Know a Man" turns out to be.  There is no entry way into this poem; while there is an attraction for works that do not announce their meanings,are opaque and obscure, one would usually prefer the works to have a style and and arrangement of contradictory elements that would create atmosphere, at least. One would expect a poem trying to suggest a set of ideas that it doesn't want to say outright to be suggestive.

This would be a means with which the central themes of useless sacrifice and petty rationalization of torture to be connect with a larger pathology in the culture. I do like the presentation of dolls as something on which the nascent characterization of adult behavior by young children are projected upon, and I like the underdeveloped link with war and wanton, rationalized destruction; this is a world where metaphysical certainty, the argument that there is an immutable meaning to our visible world and events in them, are instead improvised, variations on a theme that is less melody than slippery rules in a children's game. The best we can do is read this and admire what seems to be the author's thinking and wonder how a better poem would have done with this insights.
at May 29, 2012