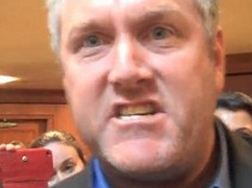 My condolences go out to late conservative agitator Andrew Breitbart’s  family and friends for their loss, but he was, in truth, a hyped up and generally unlikeable sociopath who had enough media savvy to know how to make a living and keep his name in the papers by being a vindictive and ugly little troll. It was show biz with him, not politics, and what he did was a shtick that was no more elevated than what we've seen for decades in professional wrestling: he was willingly, purposefully being the Villain, the Man You Love to Hate. He was ruthless in making already repulsive Conservative talking points even uglier, and no amount of righteous indignation coming his way could slow him down.  I go with what Lawrence O'Donnell said last night in that the private Breitbart and the public Breitbart were two different things. According to him , and others who recalled their friendships with the deceased, AB was someone who got "into character" when the cameras were on him.There is , however, evil in the world; doing what he did in the media regarding public policy , turning it into a carnival, was an evil thing to do.His biggest asset was his lack of the capacity to be embarrassed or feel shame. Him dying so young is, in itself, a tragic event, but the loss of him his presence robs us of nothing . His death only reminds the rest of us that we've allowed our political discussion to be reduced to a geek show.
at March 01, 2012