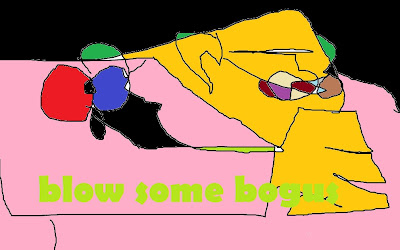 There is little else but ill will circulating through the tubes of the internet this morning, general grousing, gripes and jeremiads about little of consequence, although I would have to lend credence to the notion that a lot of anger is generated by site specific fears of losing one's financial security. This means that a good number of us in the work force, from upper management, mid management and the guys who wash out the trash dumpsters in the back of the stores we can't afford to walk into are worried that they might be invited into the boss's office and asked to close the door behind them. Not a fun way to start the morning, so I force myself to think only happy thoughts. La la la la la la is what I sing to myself, and I imagine pink ponies with ribbons and rainbows and smiley faces all over the landscape. Next I turn to my Facebook page where one of my friends posted a video of Brit punk band The Exploited doing the least ambiguous song I will hear all month: FUCK THE USA.
The rainbows evaporate, the pink ponies eat some toxic ragweed and fall over and die. Red robins drop from the sky. The smiley faces are now flipping me off.
Great.
Later this morning there is a mood of subdued insanity as each of us smile tightl
y, the corners of our mouths jagged like upended hangers, boomer rang creases pushing the eyes and eyebrows into the leering slant of a deranged carnival clown. Everything is fine and all of are going to heaven in a white boat with Black sails, that seems to be what we are dreaming while awake, a promise of deliverance tempered with an omen for perpetual disaster. Free floating anxiety that wakes up ten minutes before you do and starts pressing the proverbial buttons on the control center that constitutes your dreaming self. Oh dear, oh my, the worst has already happened, although neither the West nor the East coasts have slithered into an angry, boiling ocean. That boiling sound is more of a gurgle, the coffee maker that has stopped working, producing scratchy gurgling noises; it gave me half a cup this morning and did nothing else other than engage that death rattle. Another fine day to begin the day, especially on a Sunday. And now here I am, wondering, what? What am I wondering?

I was reading a piece by Peter Whitmer about Norman Mailer's essay "The White Negro” while on the bus coming to work this morning and noticed that the day so far had the hue of a dingy wash rag. I lifted my eyes from the twitching pages I was trying to read to see someone standing at the bus stop where the bus had paused to pick up new passengers, spying a guy in a grey hoodie standing on the side walk looking into the bus, straight at me where I was seated.
Alien twelve tone gangster movie theme songs emerged from my pocket just then, my cell phone was ringing. I answered, staring into nothing but an interface crowded with blurred icons. "This is me" I answered, "Who are you?"
The voice didn't bother with an explanation or an introduction or a confession of any kind, rather, he issued a command,
"Let me talk to the other guy" he said. There was a burst of static, a high whistling shriek. And then the phone became very hot in my hand.
After lunch I turned off the computer and noticed that there was a tickle in the back of my throat, the sort of irritation that makes you think of wet sandpaper being the universal standard for raw flesh and blues hysteria. My throat felt the way Tom Waits sounds, amplified aggravation in the center of the soft tissue, red and familiar like a bully's smirk before he knees in the nuts and bitch slaps you more time when you try to sneak out of school via the custodian's entrance. There was nothing I could do about the damn condition at the moment, but I did have a half bottle of Tustin, some generic syrup for the alleviation of sore throat, cough and yet manly enough to expel the grubbily greased mucus from the deepest of chest resonating chambers. I drank it one gulp, a semi sweetened version of the cruel cures your grandmother used to force down your throat with a funnel and the business end of a high heel shoe. It was awful, and all at once the store room started doing jumping jacks, my stomach declared itself a sovereign nation, my eyes saw through the thickest walls of the building and could the lips of cops writing crime novels behind billboards when they weren't getting hummers from bums who need one more dime for some Blue Nun. I was stoned on something, and suddenly the phone rang, or I thought I did. All I remember, really, was that I answered something.
"Gewekeekek" I said into the receiver.
"Hi, I need a red rubber octopus..."
I paused.
"Don't we all" I answered.
And then the sun exploded.
at January 16, 2012