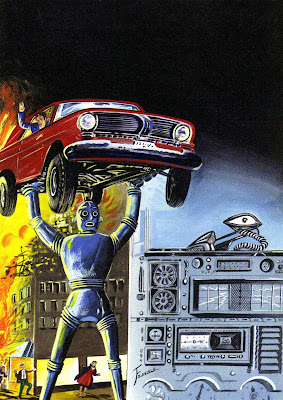 The poem "Richard Noel" is Harry Thomas' slap at obscurantist modernism in all its forms, resisting the lure of diffuse and the oblique for the clipped, staccato version of Rudyard Kipling, although Kipling himself would have furnished the fife and brass to accentuate and enliven the rattatatat of the military drums. Thomas' poem is a rhythmic straight jacket, the confined emotionalism of someone trying to keep their bleeding heart to a steady, unexcited beat. If only if he'd actually let it all go to provide us with something fiercer, more explosive than this soggy parody of Hemingway's succinct, staccato  effusions about a Personal Code.

To finish the long profile


**his grade depended on,
the afternoon before
**the surgery, alone,
he worked late in the library.
**I saw him typing away.
On my desk were his ten pages
**the first thing the next day.
Over the years I, too,
**have had hard things to face.
But when did I once summon
**such fortitude and grace?

It is admirable, one supposes, that a student gets their homework turned in on time despite an affliction, but this tribute, with its hushed bathos, seems very, very silly indeed. There is something remarkable in the attempt to overstate a point using such a crabbed rhetoric; the clichés and the conventional wisdom toward the sick and the afflicted area boiled , chipped and chiseled to their irreducible essences, leaving only a salty residue of uninteresting thinking. There is ossification here, there is poet tasting, but there is no poetry, such as we understand it. So what does one do to mend this tendency of amateurs to compose and distribute this stanza'd insult to the eyes? Exactly nothing. Nothing can be done to cure the lagging tastes of the naive.

There is that large faction of the otherwise diminutive poetry audience that likes its verse rhyming, rocking in a cadence that suggests a three-legged clogging competition, stanzas that are morally coherent and as comprehensible as a stack of pancakes, and the seldom discussed aspect among the rest of us self-declared elites fighting back gag reflexes is that this more or less a permanent state of affairs in this odd and contentious corner of the literary world. For all the chatter some of us offer up about being ecumenical. inclusive and appreciative of the broadness contemporary contains with regards to style, aesthetics, and the subtly differentiated concerns each of the coexisting schools collectively undertake to have their respective poems achieve their results, many of us choke with contempt and despair over the obvious if unacknowledged truth that doggerel, poesy, poet tasting and all the loutish rest are permanent fixtures in the literary culture that thrives beyond the ramparts.
There are no mass conversions forthcoming when it comes to convincing the rest of the poetry world that they’d be better off reading the stronger stuff. Consumers know what they want to read, and the amateur poet, not beholden to particular school of poetics or allegiances formed while they were a graduate student, will write exactly how they see fit, daring, strange enough, to write poems that make sense.

I don't think there is anything subtle or understated about "Richard Noël”. This set up is basically the plot line of the old ABC-TV disease-themed "Movies of the Week", where the usual tragedy was introduced in the first act, the resolve of the afflicted is tested as he or she struggles to get on with their life is shown in the second, and the third act concludes with the victim teaching a doubting observer a lesson amounting to the life can be lived fully even with a hindering, perhaps fatal ailment. These soapy melodramas were churned out week after week, and what their popularity attests to is that this sort of by-the-numbers approach to conflict and resolution is what the public accepts as the height of dramatic action.

What's off putting to me is the patronizing tone Thomas takes toward his subject --the whole Kipling "Gunga Din" tone of Imperialist paternalism (where there is the narrator's surprise that what he regards as "civilized" virtues emerge from a heathen subject) weighs this down with a sure paving of the narrative line to a limited series of genre constrained conclusions.
It might be interesting for a writer to use this situation as a reason for soul searching and critical self-examination, but that is a tricky balance to achieve, the getting the details of the afflicted's situation right with a delicately deployed tone , and having the narrator's introspection not overwhelm the poem and make the poem a bottomless confession. And what ought to be achieved by the third act, that final part of the dialectic, would need to be an insight, an image, a phrase that is somewhat apart from the previous two elements, something unique and not facile, as Thomas' finishing stanza was in "Richard Noel".

The execution is competent enough, although there isn’t an interesting rhythm anywhere in the poem. It’s hemmed in by its lack of distinction or character. While I don’t the poet’s sincerity, this rhymes of the sing-song variety; each time a line alights upon a previous line’s phonic twin, there’s a perceptible crash, or a thud. It’s not that I’m opposed to rhyme, but it is certain that in these days following the post modernist insurrection a poet who rhymes should be exceptional. Thom Gunn gets the craft write with his verse, bringing in associations that surprise the reader expecting a vague gloss of the subject matter due to the presence of rhyme. His work is wonderfully controlled, musical, artfully constructed without indicating the labor it takes to compose with such a tuned ear:

The Man with Night Sweats
By Thom Gunn

I wake up cold, I who
Prospered through dreams of heat
Wake to their residue,
Sweat and a clinging sheet.
My flesh was its own shield:
Where it was gashed, it healed.
I grew as I explored
The body I could trust
Even while I adored
The risk that made robust,
A world of wonders in
Each challenge to the skin.
I cannot but be sorry
The given shield was cracked,
My mind reduced to hurry,
My flesh reduced and wrecked.
I have to change the bed,
But catch myself instead
Stopped upright where I am
Hugging my body to me
As if to shield it from
The pains that will go through me,
As if hands were enough
To hold an avalanche off.

There are other poets who write a fine poem in more traditional modes who haven’t sacrificed their wit; one may argue on ideological grounds that the formalism one comes across is a reactionary movement linked in spirit and practice to a more rigid culturally conservative impulse, but for my part I prefer to judge the poet by the work. Eliot, Pound and others where profoundly nasty people who did work that with stood their propensities toward bigotry and general “A”-holism. It’s a simple matter of judging what works in the poem, and what doesn’t.
at January 19, 2012