A poem should not mean
But be. 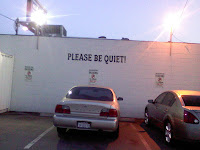 That said by poet Archibald MacLeish, in his piece "Ars Poetica". That thrust of that poem, in essence, was that poetry was no longer the central domain in which speculations about the nature of reality , beauty, and the pursuit of the Good Life were discussed and debated, and that it was , in modern times, not the friendliest grounds for
discussions about God and his purpose for us on earth. Other, prose dominated disciplines had quite handily usurped those topics as science handily dislodged, diminished and debunked the mystery and mythology the general consensus used to apply to the material world. A poem should not "mean" anything, as in questing for the precise definition of things and thereby making fixed, general statements about them. A poem should "be" as a thing itself, a material item true to its own nature, a construction of words, considered by MacLeish, WC Williams and Stevens (among the poets of that generation) to be malleable no less than clay, glass or steel.

The aim of the poem was not to reinforce the materiality of the world and the given political and economic realities that relied on perception that markets could define, exploit and profit from, but rather that poetry should tend to perception, free of the filters we've been indoctrinated into. These poets were not especially overjoyed with capitalism (although one would be hard pressed to call them leftists in any sense) and it's propensity to smash and upset the unannounced world. Williams wrote (and I paraphrase) that the thing itself was it's own adequate symbol,which , considered closely, stated that there is no God and that human personality could and needed to see the things in the world on their own terms, in and of themselves.
at September 18, 2011