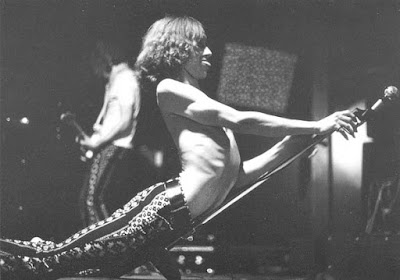 No band embraced nihilism with more profound off-handedness than The Stooges. Part of their genius lies in t their lyrics, hardly cliché but not conventionally poetic, these were rhymes that were spare and simple, and powerfully to the point, talking about the small matters of frustration that send the young mind into paroxysms of rage and self-recrimination. Ever say something or overheard a phrase from someone else uttered in exasperation or another kind of brain locking state where what is said is so starkly simple and clear and unadorned by apology or other sorts of mental equivocation that it resembles brilliance? That’s my take on the collective lyrics of the Stooges, words as an instinctive reflex, Nor was their music dependent on the trivial concern of instrumental virtuosity.

This was the sticking point with a majority of critics at the time when their first album, The Stooges, was released in  1969. In a counter-culture that was ironically putting premiums on the extreme professionalism of well-trained musicians who could hit notes precisely and improvise at length over increasingly tricky time signatures, the Stooges were the textbook example of the anathema, an insult to the taste-maker elite. Reviews were generally insulting to the band’s repetitive slam and clang approach, and it is one of the wonders of staying alive long enough to see a groundbreaking band, unfiltered from the start, outlast the negativity and change the critical consensus. The intelligentsia had to catch up with them.  The Stooges rejected formal instruction on their musicianship and, in turn, weren’t about to suffer the instructions the snoots, snobs and snoids demanded they follow.


What’s ironic is that Rolling Stone, the arbiter of quality in matters of the New Rock, still had integrity in their record reviews at the time and allowed one of their original rock  critics, Ed Ward, to let the air out of the inflated importance of over-serious rock music and the earnest critiques they inspired with his review of the album.  The first two paragraphs have Ward offering a thumbnail sketch of the band’s background, quickly followed the expected litany of sins, that Iggy is a bad Jim Morrison imitator, the lyrics are sub-literate, the guitar and drum work is lifeless and lacking even the dignity of being mechanical. The something wonderful happened halfway through. He summarized his feelings thusly “Their music is loud, boring, tasteless, unimaginative and childish.”  Then something wonderful happened.

With the grievances listed and the verdict delivered,Ward added, in a single sentence, standing alone , unencumbered by other sentences, “I kind of like it”,  Ward performed an endearing bit of proto-deconstruction, using the aforementioned deficiencies in the music as examples of  virtue, value, honesty, artistic vision. It was one of the great pieces of rock  criticism because here Ward created the basis of real aesthetic argument that maintained, essentially, that the Stooges were the true face and sound of a rock and roll that was relevant to life as it was being lived by millions, a voice, sound and poetry from the curb, alley and shuttered doorway that wanted nothing to do with millionaire musicians with long hair striving to achieve legitimacy by mimicking and misreading the most superficial elements of High Culture.  Ed Ward established the concerns that Lester Bangs soon picked up and turned into a masterful argument with the dying of the light. We can thank Ed Ward and the Stooges for that relief.


This was a band that went in the other direction when they began their quest to find what lay beyond avant-garde posturing in Music during the 60s away from trudging drum solos and long-form guitar essays. Iggy and the Stooges were primitive, out of tune, irritated and irritating in turn. It was a matter where the band and their front man, Iggy Pop (nee Stooge) blended perfectly, given their ability to turn something that sounds horrible and repetitive into a crashing, sustained drone of attitude, and Iggy's serpentine stage presence and clipped verbal dexterity. He was the guy who couldn't sit stand and would stand for nothing less than what he wanted in full, and they were the grind of the city turned into a droning inner voice prodding him to smash down whatever walls came before him. It wasn’t that he was a bad boy going contrarily to the niceties of all things middle class and calcified, it wasn’t that he as a sentient being had identified an artifice he disliked and defined himself in opposition to it; it was more like Iggy Stooge was unaware of the feelings of others, greater ramifications of dangerous self-gratification, or any code of behavior the rest of us depend to keep drivers and pedestrians, for example, on the streets and the sidewalks, respectively. He was unadulterated id, a squirming mass of impulse that transgressed boundaries, mashed together poetry and porn, and displayed no interest in theorizing about what he had done or about what he was thinking of doing.  His was the case of living in the present tense solely, and whatever sensation at the moment was utmost. Let us not be mistaken about this, as Iggy Stooge’s persona and psyche had the virtue of being monochromatic; his immediate impulse was not the only thing that mattered. There simply wasn’t anything else.  All this play against the quarrelsome insomniac raunch of Ron Ashton’s guitar work, very simple, rudimentary, undeniable effective, endlessly influential. What he lacked in technique he made up for in essence, a counterpoint to the corrosive thrills of Iggy’s distilled juvenile delinquency; his guitar work might be politely described as “steady”,  but this a dodge against the annoyance factor this band turned into a new aesthetic. “Persistent” is more apt, like a dislodged bit of a fender dragging along the highway, kicking up sparks near the gas tank, or a door slamming for hours in a strong wind, or jackhammers at night carving up your street at precisely the moment your brain demands you sleep or die inanely. Obnoxious,  profound without knowing. We should all be grateful these guys wielded musical instruments, not guns. Or worse.