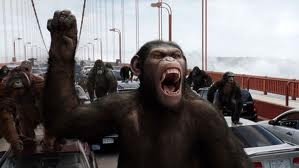 I just took an extended gander at "The Rise of the Planet of the Apes" and this reaffirms that 2011 has been the tamest and lamest of Summers for action, science fiction and fantasy films. It's not that there was anything wrong with this newest version of the Apes franchise--a prequel that goes to lengths to furnish background drama on how those Damn Dirty Apes got so smart and how they could speak in stilted, theatrical English-- but just how bloodless this enterprise is. I would assign the blame to length, as this film tends to linger on the admittedly wonderful special effects to make the ur-Simian, Caesar, into a convincingly expressive animation.

All told, though, there is not much room for the non-disguised actors to do here, given the kind of Exit Stage Left dialogue that is sounds like hurried rewrites of various signifying cliches.The cast never really  commit themselves to the eviscerated exchanges provided them , a shame, since there have been a number of action films  with  rickety chit chat that still managed to give a number of quality thrills, accomplished , I think, with a one two punch of a cast going for the gold as they mine whatever worthwhile emotion they can from the silliness of their set speeches, and direction, where a good director with an instinct for set ups, surprises, pacing and editing can create a verve the script doesn't  originally contain.
Pacing goes a long way, and this film drags fatally in the middle ; it makes you long for the days of leaner action movies, like Die Hard  or Alien.  An action movie cannot decide to take a rest in the center of it's unfolding. The actors, as a result, appear to have nothing else to do except trudge from one scene the next. The shoes and their boots  appear uncommonly heavy.James Franco in the lead has fewer expressions than headless mannikin; worry, concern, inner turmoil, anxiety, dread, dread, dread, the man appears to be nursing an ulcer rather than overseeing a scientific breakthrough.
at August 24, 2011