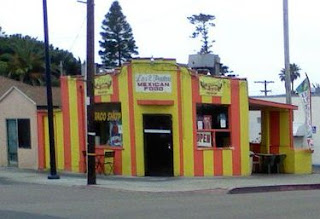 Yes, San Diego is hot in July, beastly sometimes, that insects chew your collar kind of heat that feels like a combination of itches and small bites as you tough out the day in a smelly t-shirt and a bottle of tap water that has the chill of room temperature coffee. Tell anyone who lives elsewhere in the contiguous United States that you're unhappy with the way the July climate of San Diego has taken to expressing itself on your particular day off and you're likely to be laughed at, slapped, spit upon, mocked with sock puppets questioning the legitimacy of your family line. Worst, someone you care for dearly, or at least took to be someone somewhat sane and not given to hasty reactions, would slam the phone down on you make you disappear from her Facebook simulacra. Horrible things to ponder while you stand over a retail sales counter in that smelly t shirt ringing up sales of nicks and nacks and varied  punk bric an brac made in China, but alas,  cooler climes.

"My testicles  are in a twist, bitch" is what my ex girl friend in Detroit told me.  She's now fifty seven years old and now works in the Cass Corridor where she manages a Swedish Black Metal Cafe called Bub's.

"All my studs are rusted and no ointment cools the irritation, motherfucker". I said it was good to hear her voice and wondered aloud if her Swedish  Black Metal Cafe was making any money. Money was the reason I called, as I lent her train fare to Amtrack her way back to the D after she visited me in Pacific Beach five years ago, both of us staying in my walk in studio apartment; it was the same thing as locking two hungry baders in a dark , empty sardine tank.  "Jesus , Ted, your tunes are lame" she said at one point, "I mean, where are your Skull Drag discs, where's the killer Fist Taco Grope Technique jams? No one cools a hot day like Slit Tongue Manicure, fuckin A, Jack..." It went on like that, ugliness and snarls. Even the garbage complained about our noise.

"You ain't seeing no goddamned money til you say something clever about the weather" she declared, and then she yelled to someone "Gapper, make me a Psychotic Break,  extra lemon".

I had another call coming in just then. I told my ex to hang on while I got the call. "Hold on just a second. But remember, I can really use the money."
"Eat a crab apple: she said, " hurry up". I answered the other line. It was Mike from Detroit calling.

"BURKE YOU FUCK FACED TRAITOR!! DETROIT IS THE ROCKING  CAPITAL OF THE WORLD, MAN IT'S HOTTER THAN A SPENT CAP O JAVA GRUNION, ACE. FLIES AND SKEETERS AND BIRDS THAT LOOK LIKE WINGED FITS OF HARD TAR ARE FALLING OUT OF THE SKY, ALL OVER LIVERNOISE, ALL OVER EIGHT MILE, COVERING JOY ROAD, FUCKIN' A. I am coming out there in couple of days and I need you to know one thing; WHERE'S MY  MONEY...!@!@#!"