History stammers when it repeats itself 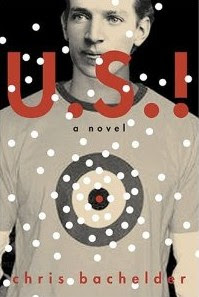 U.S.!
a novel by Chris Bachelder


Chris Bachelder is a lovable prankster who likes to turn the nicely fitting glove of literature inside out. while the rest of us are looking for meanings and various forms of significance in the interior decorating of conventional fictional devices--to this day, we all yearn to have poets and novelists to tell us The Truth-- Bachelder prefers to spray paint on the props and show us the cluttered backstage of these settings. And better yet, he rather likes in tying the shoelaces together of the pompous, the serious, the bizarrely sanctimonious. "U.S.!" has him imagining a world where the true believers in an American Socialist Revolution manage, through some vaguely revealed ritual of magic realism, to bring the dead activist novelist Upton Sinclair back to life; back to life the poor, steadfast, solemn socialist does, looking increasingly awful and putrid at the edges, going on the lecture trail, writing and publishing more of his cardboard narratives, trying to convince an amazingly uninterested citizenry the exact nature of what's killing them. Nothing comes of this, as expected, and the intrepid Lewis finds himself talking himself hoarse , only to find himself being killed violently and then ingloriously resurrected yet again. A surreal fish-out-of-water story, Bachelder has a perfect ear for duplicating the static prose of the late novelists, and excels at demonstrating the striking contrasts between those who think that literature can make populations shed their entrenched and deeply rooted versions of Bad Faith and rise to the selfless cause of The Common People; this is a story of where the idea of the progression of history toward a final and just time, intersects with a culture where history does not end anywhere at all. Rather, it splits off into many tributaries, a crossroads every five metaphorical miles.Upton  Sinclair , tragicomic figure he is, stops at each of them, scratching his head as to which road to take
at August 06, 2010