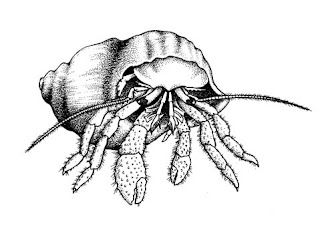 Gail Mazure loves the telling detail in her poetry, a quality that can make for an intense reading of somone linking  the fluidity of experience with the  silent witness of inanimate things that happen to trigger an associating spree. She fares less well with  "Hermit". One of her shortcomings as a writer is a tendency to prattle; we witness a strenuous comparison of human habits and the observed , repetitive activities of species of crab in their natural environment. It's been remarked too many times that the act of perceiving something changes the nature of the thing being studied, and here I'd had have to reason that the intent hasn't anything to do with the crabs and more do with the convenient wallow that are the poet's projected short comings. The title is the tip off, and the punch line comes at you too soon, too often, over to great a length.

One might note the digressions and find wonder in how she deliberates on Aristotle and the ancient Greeks who first syllogized about their place in the world of appearances but the effect here is drift. There is awareness that the poet tends to imbue the natural realm with characteristics mirroring concepts one identifies human activity with, but this stepping back from the metaphorical apparatus originally mounted in place serves only, I think, to introduce more intellectual clutter, that crabs are actually subject to Darwin's terms of natural selection.

The irony is something you see coming right at you, conspicuous as a Barnum and Baily clown on a Wall Street trading floor; it is not the hermit crab that resembles human, but the rather the reverse. All of the things like emotion, poetry, philosophical speculation might merely be expressions of species behavior who's base motives are to feed, propagate, survive. Arriving at this point is not unlike listening to a bad joke a hundredth time from a friend who can't remember that you've already heard it, a hundred times.But we arrive at punchlines again; they ought to be efficient, quick, punchy. The good poet knows when to stop.  One elaboration is too many , and a thousand is not enough.
at August 22, 2010