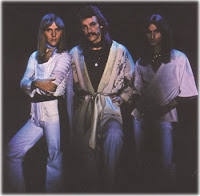 Rand Paul's campaign for Senate has received from legal representatives of the band Rush informing them that they are using some of the band's copyrighted music without permission. You'd link that it would part of that erstwhile libertarian's animal instinct to pay Rush the money required to lawfully use their music to sell his brand of anti-statist snake oil. I would imagine an intern, aiding a campaign advance man, cobbled together the soundtrack on the fly without a second thought to obtaining permissions, but the notion that creators should receive compensation for use of their work is such a bed rock belief in the firmament that you wonder how this slip, though minor, could have happened. The pun is obvious enough; who did the soundtrack preparations for the Paul campaign did a rush job.(Sorry.)Funny thing, since Rush are Ayn Randians. Unrestrained free-marketeers ripping each other off, go figure.Imagine a world ruled by people who take what they want with what ever cavalier strong arming it takes . Rush and Rand are a perfect match, by the way: the respective music and novels each has produced are big, clumsy, and chicken ranch dumb.
at June 04, 2010