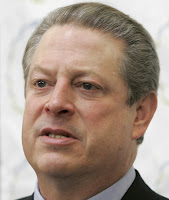 I could care less if Al Gore had tried to convince a late middle aged masseuse to entertain his Happy Wand; what matters to me is the work he's done and continues to do in campaign for policies to counter act the effects of climate change. As tired as many of us are of the subject, the severity of not doing anything about it remains fatal, and Gore's arguments in favor of a major change in our our political and economic methods haven't lost their urgency. I suspect the population would rather not contemplate the permanent ruination of a everything that matters in this life and would prefer to reduce the issue to another run of the mill celebrity sex scandal. The thinking seems to be that the diminution of Al Gore's reputation will likewise diminish the importance of literally saving the planet from our worst, accumulating habits; this is not far removed from witnessing a cancer patient trying to wish away their disease by ignoring it or playing loud music.
at June 26, 2010