Keep your pants on 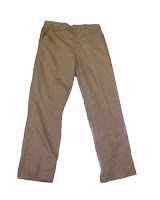 It's springtime, the temperatures rise, the flowers blossom and the nostrils swell with the scents of clean air, a sweetness that hearkens you to younger, hardier, randier days. At the drop of a hat when the instincts overcame your better thinking in tandem with a like minded partner--heads and genitalia swelled with the flush of urge and there was no argument to stop the rearrangement or removal of over and underclothes. Desire had it's own logic, but it was without language or syllogism, no conventional tools at all; it was an eroticism of things in your surroundings being focused, like perspectives that vanish to the same point , the same conclusion; you have to get your nut. This moment in the day, after the stolen looks, the limping banter and sly insinuation, has been dictated. You vanish, you get your rocks off. And for the rest of your life you relive those moments, as there is in the accumulated memory the incidents that have the psychic tabs sticking out . The days at the job, the conversations you find yourself having, your appropriate discussion with someone half your age set you up for visions of old youth and the energy stream you hadn't dipped into for years. The current race reminds of you of every erotic thing you'd performed; for a moment you find yourself slipping between dimensions, the conversation you're actually having and the bed time story you're presently reliving.

My student sends letters to me with the lights turned low.
They feature intricate vocabulary, like soporific and ennui.


Like intervening and kinetic and tumult. He strings words together
like he's following a difficult knitting pattern. He is both more

and less striking without a shirt on. I know this from the time
I ran into him at Wal-Mart buying tiki torches and margarita mix

and, flustered, I studied the white floor tiles, the blue plastic
shopping cart handle, while he told me something that turned

to white noise and I tried not to look at his beautiful terrible chest,
the V-shaped wings of his chiseled hip-bones. I write him back.

I tell him there are two horses outside my window and countless weeds.
I tell him that the train comes by every other hour and rattles the walls.

But how to explain my obsession with destruction? Not self-immolation
but more of a disintegration, slow, like Alka-Seltzer in water. Like sugar in water.

I dissolve. He writes enthralling. He writes epiphany and coffee machine.
He is working in an office, which might as well be outer space.

I am in the mountains. The last time I worked in an office, he was ten.
I was a typewriter girl. I was a maternity-leave replacement for a fancy secretary.

I helped sell ads at TV Guide. I was fucking a guy who lived in a curtain-free studio

above a neon BAR sign on Ludlow Street, and all night we were bathed in pot smoke

and flickering electric pink light. Here, the sun goes down in the flame
of an orange heat-wave moon. The train thrums and rattles the distance,

and I think of his chest with the rounded tattoo in one corner and my youth,
the hollows of his hip-bones holding hard, big-box fluorescent light.

Meitner's poem gets that layered desire right , exquisitely so,  especially as she tries to talk about her young male friend's seductive use of big words while trying to study his shirtless chest and bone structure . She dissolve, she says, and her memories are no longer ordered by date, but become , it seems, a series of membranes she passes through. The connection with the actual moment is tenuous as the euphoric recall gives way to biographical detail, wonderfully , enticingly offered up here in the guise of bars, tiki torches, WalMart stores.  The community she lives and works in , for a moment, seem cruelly banal as the light of previous glories of skin loom large. The authority of the senses rules out any other possibility; for a moment, a fleeting moment, the promises one has made and the commitments one has taken matter not a wit. But one is anchored to the moment they are in--the mate, the job, the children all require your attention. All you can do is step from the time machine, brush off the dust, return to the world at hand.
at April 23, 2010