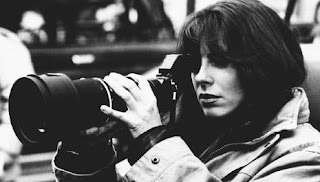 Profiling  Hurt Locker  director Kathryn Bigelow hot after her historic  double Oscar for Best Film and Best Director,  Vancouver Sun writer Jamie Portman made note of  the film maker's "simmering anger" and her seeming fascination with violence.  It's been asked, reasonably, that if  Bigelow had been a man, would the reporter had written the article the way it  was.. Kathryn Bigelow directed a fine motion picture that won both best director and best picture Oscars, which establishes her as a director of high skill who takes a back seat to no one. She also joins a community of artists who's personality quirks become almost as well known as their work. One can imagine the equivocating  variations that will be spontaneously created when those thinking they have issues with Bigelow's cinematic vision. She might become part of a name-dropping choruses that give quick inventories of the pluses and minuses of being a famous artist:

Mailer is a great writer, sure , but isn't he a blustering egomaniac? Bukowski is a brilliant poet, yeah, but isn't he an incorrigible drunk? Picasso reshaped what can be  done with paint and canvas, but  wasn't he misogynistic monster? Brando redefined film acting for a generations to come,but wasn't an self-destructive egocentric?

Maybe the director will one of those who are referred to by their last name, "Bigelow", with readership knowing exactly who you're referring to. The advantage of that depends, though, on whether one's body of work or the history of their public moodiness is the first thing people think of when one's name is mentioned.

The pattern is discernible, where one begins by acknowledging a subject's talents , gifts and accomplishments, and then qualifies the exceptions with what are more often references to gossip talking points than a writer's subtle observations. Still, it becomes fair game , as many celebrities discover. The fact that they are celebrities means that they are news, period, and discussion of them is not limited to the quality of the work they do. Bigelow's temperament has been no secret in the film industry for years, and now that she's made history by being the first woman to win the best director award, her past work and her short-fuse become topics for conversation.
So yes, if Bigelow had been a man with the same history of anger, I think the reporter would have recent much the same thing. And it is, in fact, unusual for a woman director to be as fascinated with violence as a male director is; that's what makes her a ground breaker, that's what makes her newsworthy beyond her two Oscars, and it's something fit for public discussion.
at March 11, 2010