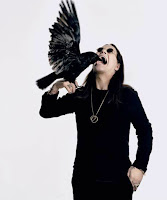 James Parker has a fine appreciation of Ozzy Osbourne in Slate, inspired by Osbourne's new book I Am Ozzy. Less a review of the memoir than contained think piece that contemplates the essence of Osbourne's former band, Black Sabbath, and Osbourne's peculiar form of haplass genius, Parker does a good job of revealing why this pioneer of fuzztoned dystopia is the enduring guilty pleasure he is. Regardless of what one has read about him with regards to communing with Satan and the dark side in general, Ozzy is likable. Very likable.I interviewed Ozzy for my college paper in the 70s, and he was actually one decent guy, a decent sort and all.

It was the week of the mass cult suicide of Jonestown, and as I and the photographer asked Osbourne the usual questions about life on the road, groupies, drugs and guitar strings, the television in Ozzy's hotel room was blaring an update on the unspeakable tragedy. Ozzy turned to look at the screen where a news film clip showed a jittery scan of the bodies lying over one another in the fatal compound.
"How can anybody do such a fucking awful thing" he said, "forcing little kids to drink cyanide. You know what that does to your insides? It eats at you, it's a terrible way to die, fucking sadists..." His gaze drifted off for a few seconds and then he returned to the interview when his manager knocked on the hotel door to remind him that there were other media folks waiting to talk to him. We spoke some more about rock and roll in general, and when the photographer and I rose to leave at the end of our interview, a "Star Trek" episode came on. I forget which episode it happened to be, but what was certain was that the special effects were cheap and cheesy even then.
"Oh, man, this is the greatest fucking show" said Ozzy as we left, and that's where we left him, at the extreme ends of things, Jonestown and "Star Trek". Fucking Awful or Fucking Great. And that's how he remains.
at February 07, 2010