"Consciousness" by Ellen Wehle takes us, it seems , to the backstage area of our awake personalities, the place where our prop-worthy similes and figures of speech are readied and positioned, the hope being that the word combinations match the shape and tone of what the eyes perce 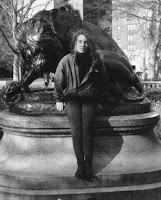 ived. Better, it's a spat among the workman to cues and timing of lines; still, the play must go one.The concrete and the abstract meet here, in some figurative back alley, seeming to mime each other's meanings and movements in parallel movement and lexical simulation, like some tense discussion that is all but a yelling match underneath a sighing, impatient surface civility. Representation , simulacra, codes of various types call attention to the events of the real world, and one learns rather quickly that existence , as is, hasn't a storyline it lives up to or a script it follows, but rather goes it's own way. It is our need, among the systems of narrated coping, to give these symbolic virtues to things that happen all of a sudden, or inevitably, but both beyond our expectation and control.

Engine-hum in back
Alleys where all night

Trucks idle their load,
Whomever the Devil

Would destroy … how
Does that saying go?

Yes, how does that saying go, what was said once by a wise man, where was it that I read...? Narrative , often enough, comes after someone--a writer, poet, a writer of computer games--has had enough life out of their parent's home and has something of their own biography. We have our goals, we have a sense of what we've so far leading up to the current moment, and we expect a certain trajectory for the rest of our being--we expect our lives to have a coherence and a legacy our grandchildren would enjoy hearing. But things go wrong, the material of the planet and the accumulation of forces reach their tipping point and our paradigm is upset; we forget our homilies, who combine our cliches and abandon ourselves to an every-man's fatalism: "such is life". But even with the plot lines we've assigned and assumed for ourselves cracked, stalled or limping, we hold on to the different parts, we adjust, we try to mend and repair the straight road we were on, we carry those things we cannot use. Just when we most need to drop the rock we hang on to it most.

Ellen Wehle's poem confront us with the machinary that gets us through the day, and here rather nicely, sparely, jaggedly reveals something in people who will argue with themselves and those they are close to about why their assumptions hadn't turned out as they thought it would. This, even as they plough ahead, accepting, in some grudging act of survival, that one must press on and linger on dreams that didn't get fulfilled. One does not surrrender to the hard facts of bad weather and no money, one keeps on with whatever sources they have--optimism, hope, anger and spite, different motivations for different people to get to the other side of their despair.

Can we not silence
It even half an hour:

Slip off our headset,
Forget the last ship's

Far below the waves.
… he first makes wise.

Conciousness seems to the result of our need to see ourselves in life as automonous beings making their way through an existence that would otherwise be absent of purpose. Wehle gets to where this connection fragments, and underscores with an interesting filtering of soured sentiments emerging from solid facts one cannot expel from their storyline. Conciousness is more a matter of continually waking from what guiding principle and learning to live life on life 's terms, not on your opinions on how things should go. Conciousness itself isn't a single state of being; it changes constantly, not unlike the mountains and oceans and bad weather it's fluidity of perception tries to help you understand.


What doesn't kill you makes you smaller, and you discover that wisdom is the knowledge of what won't work out. Ellen Wehle is a fine poet of the simply addressed dilemma; her ability to catch the deep, exhausted breathing implied between these sharp, bitter missives demonstrates something that Hemingway understood: an experience worth relating needn't be talked to death.
at November 17, 2009