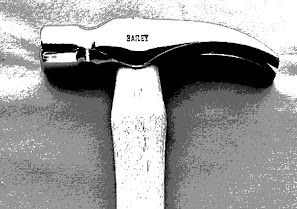 A little guilt mongering is just what you need to deliver several stanzas of applause ready morality. Anthony Hecht loves to bask in the glow of Points Already Made.The idea seems to be that even with the advance of decades since a horrific event, later generations still bear a moral responsibility for atrocities committed in their country's name; one cannot consider themselves excluded from the fatal commotion that had come before--there is no statute of limitations as to when no longer carries the blood stains and the culturally inscribed rationalizations that made the murder of millions a massive event performed both for the greater good and a fulfillment of an historical inevitability. There is no generational privilege; whatever one tries to do in occupation, hobbies, lifestyle, the routines of contemporary life, on grand and smaller scales, echo the terror, whisper of one's connection to the evil that was perpetuated, implies without subtlety one's responsibility to change the culture to the true nature of a collective personality that made the unthinkable an historical fact we must confront.

Prepare to receive him in your home some day:
Though they killed him in the camp they sent him to,
He will walk in as you’re sitting down to a meal.

This ending is straight from the Twilight Zone, which would have been fine if this were an early sixties television show emphasizing a then-controversial Humanist perspective. Controversial ideas, though, are mainstreamed over time, and this poem seems to occupy a space on the shelve of Subjects No Sane Person Would Argue With.
Hecht, though, is heavy handed in this delivery of what is history lesson and moral that would make for an easy round of applause; one can't argue with his politics or his sense of morality, but the parallelism he uses goes quickly from being an effective device to a trick used a few times too many. As with some other poems of his I've poured over, there is a smugness in his work I find grating, even on points I would otherwise agree without pause or reservation. Hand wringing is what occurs to me, a routinely glum observation that humans are fully capable of being evil , despicable bastards, and that the people who make such monstrosities possible are likewise horrible. This would make a fine speech,but it makes for a poem that wears it's morality like a loud suit of clothes , clashing and garish colors that obscure substance.

There's a clue in the Martin Luther quote Hecht uses as an epigraph, ,Martin Luther’s translation of John 19:7 (“We have a law, and by that law he ought to die.”)
An ironic counterpoint, I think, given the discussion that's already go on ; Luther believed in a higher order and a Higher Law , and was inspired to disregard Papal rule in pursuit of what he considered God's true nature and calling. Laws are written for the convenience of man's convenience, greed and fouler purpose, and the laws the ancient Jews obeyed to justify Christ's crucifixion, as well as the legal and moral right Nazi's claimed for their genocide were cruel, thin fictions that collapsed under historical weight. Hecht seems to want to set us for how consistently small minded we are in our variety of evasions and excuses for the horror we've done; the poem, obviously, reminds the reader that we cannot escape what we've done to one another; my problem with the poem isn't the moral, but the delivery in general--hammering, heavy, lecturing. It's a message without grace .


A large part of his problem may have been his choice of writing this as a sestina, which limits variety.He's obliged by requirement to repeat phrase and idea in conspicuous variations that extinguish the possibility of surprise. Good poets work through their metaphors and themes so that a premise they begin evolves into something larger later in the work--a reader, when the poems are successful, gets an idea of how ideas are not fixed things, unchanging, but rather change when made to interact with a crucial "otherness" that coincides a verse's codified vernacular. There can be, I think, some playfulness in the language that can make even the most baleful subject stick with you without cramming your face deep into the moralizing. Hecht's choice of sestina, though, coincides with intent. He obviously didn't want his audience to miss his intended ironies and picked a form that would make interesting obfuscation difficult, if not impossible.
at November 07, 2009