Give them hell, Keith Olberman 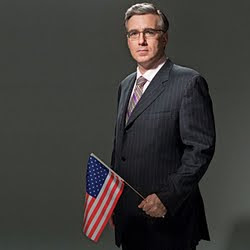 Keith Olberman, host of the political news and commentary program Countdown with Keith Olberman on MSNBC, dedicated the entire hour of his show last night to a Special Commentary--read "editorial"--on the need and the requirement for major health care reform. It's about death, he proclaimed, his voice firm , with just a tinge of an outraged tremble characterize his impeccable syntax. The issue is about death and how we, as a country, as a culture, represented and served by a government ostensibly by and for The People, do what we can to humanely for-stall death, extend life, and improve the quality of life that we have. Death wins out every time, Olberman admitted, but the inevitability of the Grim Reaper's visit wasn't the issue. It came down, rather, to the battle between those who want to aid the sick, help the infirm, and make it possible for citizens to avoid illness and catastrophic circumstances when they can, and those who would rather the infirm just go away. It was a potent forty minutes or so , a well phrased, acutely articulated, wide ranging polemic that was in part personal testimonial--Olberman detailed his father's declining health as well as his frustration and dismay with the health system he witnessed in place-- and historical survey of the corporate bottom line at it's most mendacious. You can view the entire commentary here.

Someone said else that Olberman is a windbag, but he's our windbag, and I say God bless for being the one to bellow the truth about Republican greed and dishonesty and to dedicate a full program to discuss at length about Health Care. Olberman is a good writer--his prose assumes that viewers are able to follow compound sentences that contain more than one idea--and he is , contrary to those on the other side of this issue, sufficiently buttressed by the truth. Not a set of ideologically framed truisms and unvetted talking points, but facts. I thought his comment was forceful, powerful stuff, and the use of his father's illness and his own frustration with the systemic incompetence of our health professionals put a human face on the sort of corporate neglect which denies care to millions of sick Americans.
He was right to go straight to the unsaid bottom of the issue, that the whole shooting match centers around death, on the forstalling of it's onset and the improvement of life before it's arrival, and to deal at length at those entrenched interests who's priorities are for an increased number of subscribers paying monthly premiums and for paying less in payouts on an increasing number of claims. The comment veered here and there, of course, but this was purposeful, deliberate, perfectly illustrative of the calcified corporate culture that has no grasp of the human dimension of their business, the lives of the clients they nominally exist to aid in time of need.

Olberman is right to assert that the companies do not care for the well being of their clients and that only a ground swell from the public, tired of being duped into supporting policies contrary to their interests, is what's needed to change a medical system that will collapse upon itself. Olberman speaks truth to power. Go Keith!
at October 08, 2009