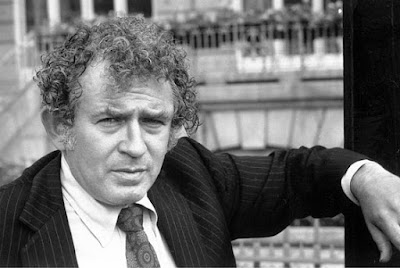 It's time, I think, that the amorphous reading mob called call "we" slide past hurt feelings and admit that the late Norman Mailer did write more than a few books where talent outshone excess and ego. In my mind, anyway, and you can read my various pieces on Mailer's career and work in this blog's archive. His enemies, though, won't his credit for composing anything of worth than The Naked and the Dead, and lately, there is a buzz that it was a fluke, or, as Gore Vidal wrote, "a fake". Sour grapes, it seems. Sometimes the name doesn't have to be mentioned at all, as some dedicated haters will just dump a smoothly honed rendition of Mailer's sixty years of negative press in a belated effort to get their licks in. Norman Mailer cultivated turmoil and controversy with the publication of his 1959 combined memoir essay anthology Advertisements for Myself, where he declared, on the first page, in the first paragraph,

The sour truth is that I am imprisoned with a perception that will settle for nothing less than making a revolution in the consciousness of our time. Whether rightly or wrongly, it is then obvious that I would go so far as to think it is my present and future work which will have the deepest influence of any work being done by an American novelist in these years. I could be wrong, and if I am, then I’m the fool who will pay the bill, but I think we can all agree it would cheat this collection of its true interest to present myself as more modest than I am.

No one was better on the subject of his own vanity and the presumptions of what his talent could do than Mailer himself, and very few others, even the most conceited of our best and worst scribes, were willing to go as far as admit that they wanted to change the world through their art. Only Ayn Rand comes close, I think, but the difference was that Mailer was an artist above all else, with an artist's inclination to follow a whim. Rand, locked into a philosophy cobbled together from misreadings of Plato and Nietzsche, couldn't break from her self-constructed jail of doggerel and dogma; Mailer strayed in interesting, sometimes illuminating ways, his vanity in tow, willing to be a clown, if need be, to produce the book, to advance to the next project. He had bills to pay. Conservative literature czar Roger Kimball blogged an extensive litany of Mailer's infamous deeds, and offered an acidic view of his major works; the essay, though, went online so soon after Mailer's death that one can't help but wonder if Kimball had it sit laying in a drawer, figuratively speaking, waiting for years for the author to pass on. It does read like a jealously kept collection of evidence Roger was saving so he could cast a definitive and finalizing negative assessment. I should mention, though, that a few days later the site, Pajamas Media, published a more balanced overview of Mailer's career by Peter Freeman who, though appalled by Mailer's antics, admitted that the wildman was still an artist and was capable of finely crafted writing. Good for them, for once. Those like me desiring lengthy evaluations that make the case for the overall success of Mailer's odd genius can find solace in Lee Siegel's critical summary of his work in the New York Times Book Review when he reviewed Mailer's final novel The Castle in the Forest. It's a smart fit, as Siegel, like Mailer, is something of a blowhard and in love with his own intelligence; all the same, again like Mailer, the man is smart and has the right take on what the novelist was up to with his practiced exhibitionism.

The latest instance is from Commentary Magazine; basically a compendium of the lowlife's of Mailer's public career, the piece declares, for the most part, that Mailer's body of work was, in its entirety, dull, the prolix vaporing of a delusional fool. The level of gossipy slander is high, and no real argument is made as to why Mailer's books, pace Naked and the Dead, are dead on arrival. Consider the source; Norman Podhoretz is still trying to settle scores. That his publication is arguing with a dead man heightens Mailer's value. I don't doubt many work boring, but I think it's more to do with your taste rather than with the late author's writing. Writers who are boring, dull, lacking ideas, verve and are unable to make themselves more captivating generally don't spend six decades in the spotlight of contemporary American literature, as Mailer had. Not that there's a consensus on his work and life; fierce debates about his books have been raging nearly as long as he's been a public figure. This nearly sixty years of contention by critics and readers, yay and nay, is not the mark of a boring writer. Boring writers are ignored and go unread. Mailer, to say the least, you paid attention to. I would reject is an all-encompassing pronouncement that Mailer is an awful writer, or that the majority of his work is dreadful and merely the extensions of a large, unclued ego. The fun in all this, though, is contrasting one's peculiar justifications for enjoying or disliking a writer (or filmmaker, poet, painter) and seeing what responses come forth that think differently.

There is something to be said about Mailer being the second hand and slap-dashed in his writings--I'm thinking of his foghorning pomp on the state of American theatre in his introduction to his play version of The Deer Park, his glorification of juvenile delinquency and his homophobic mewling in Advertisements for Myself -- but he did, for me, rise above was mere petulance and high octane assholism in his writing, which is to say in his thinking, that he kept me interested over the course of forty plus years of reading him. Of a Fire on the Moon, Harlot's Ghost and Why Are We in Viet Nam are written in three distinct styles, with varying dictions and pitches. It was a large plus in Mailer's column that he varied his tone to do the best service to a story. As much as one admired and even envied the rolling cadences and chain-reaction like flurry of metaphors of the style that characterized, his richest period, the sixties through the seventies, one had to find relief that the author himself seemed to have grown bored with addressing himself in the third person and proselytizing in a high rhetoric.

The briefer sentences, the barren, stark voice, the uninflected hiss of the language was the perfect foil for The Executioner's Song. He was not the perfect writer, but from the excess of his self-promotions and cracker barrel prophecies comes a voice unlike any other, and a voice as well with sufficient mastery to have produced a handful of masterpieces as well as a selection of egocentric subject groping. These are the works that Mailer partisans will have to contend transcend the late author's feuds, fights, wife stabbings, drinking sprees, and divorces. The hope is that his reputation as a writer catches his notoriety as a professional jerk.
at September 19, 2009