Looking for a Useful Past 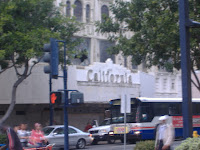 Guys like Pynchon and Barthelme are analogous to the Sex Pistols and the Ramones; we owe them a debt, but their art is no longer a relevant response to what is actually happening now.
--from a discussion at Salon,com's Table Talk forum

Some one you owe a stylistic debt to be always relevant to your current situation; how you respond to the precise writing problem you’re facing demands that you conjure up inspiration to solve the cul-de-sac you’ve written your way into, but that inspiration rarely happens in a vacuum.You rummage through those you’ve read, writers who’ve given you an idea or two about composing together that can get across the subtlety your thinking (the evidence of which might be, damn it all, that you haven’t the light touch after all), and forge something useful from the parts. You can also decide to forgo the effort to learn a lesson from your mentors and strike out with a new take, braving the unknown where none of your influences apply, but there we are again, in the area Harold Bloom mapped out in The Anxiety of Influence; even the most strikingly original art one can create is original precisely because younger artists is determined not to write, sculpt, paint in anyway resembling the work of the greats who’ve come before them. The irony is that is one refers to the past for inspiration even if rejection is the result. The shadow of the past and the power it contains still commands and commends us to try harder to emerge into one’s own light. This is the reason that we acknowledge what we owe.

Pynchon is certainly relevant to the current situation, and we should consider his novel Mason & Dixon: an original take on the historical novel that skews the moldy texts of mythology and history in a fresh, "made new" manner. Pynchon, along with DeLillo with his tour-de -force Underworld, are both at the center of American writing, ironic, one supposes, since we are in a time when the current fashion is to insists on the resolute lack of center, or a knowable, defining presence under the surface of things, under the disguises of material.
Pynchon and DeLillo are relevant to a that search for coherence, the unifying set of references, that might connect the world that's been made with the universe it's been constructed in. Both authors are relevant because, truthfully, the honor the notion of the Search, the Quest for defining, that is literature at it's most compelling, the books that bring generations back to the shelves looking for the titles.

The late work has only gotten stronger, broader, and more concise with the kind of rigor, style and humor; ultimately, it takes to write a literature that brings a digitized culture into the next hundred years. The things of the world we grow up quickly vanish; the language we learned to express the needs of the self in relation to another is supplanted by another species of cant, unrecognizable as to what psychic wire it's supposed to resonate with. Both writers are intrigued with systems, hierarchies of meanings, colliding matrixes of name-giving authority that makes the explicated terrain, the perfect sphere of a democratic society, a tag-team wrestling match.
Underworld is a novel of about the search by different characters for what's keen about the past, what rituals or artifacts were displaced in the rush of technology and capital flow that de-centered the world, the neighborhoods the characters grew up in. Thus, the metaphor: obsessions with throwing the used up away with the waste disposal company, the search for the symbolically Idyllic in the quest for the allegedly important baseball (along with the person-to-person myth making that accompanies it), the nun in the South Bronx searching for the intrinsic worth of the small child she sees amid the bombed out tenements she toils in, and the artist Klara in the desert trying to redefine the past by converting abandoned bombers into art objects precisely in an area when only a few are able to appreciate the redefinition.

Mao ll is DeLillo at the height of his powers, and is his best effort that confronts the fact that media saturation becomes a simulacrum of an actual environment that changes the way history is not only recorded, but simultaneously made. Potent writing, one of whose characters is a reclusive Pynchon (or DeLillo) stand in whose absence of new work or public appearance has created a presence larger than literary reputation alone could manage: if we talk about the speed at which disparate events suddenly seem to converge and become linked through the slimmest of resemblances, this is the novel to start with. Its themes and its power are echoed largely in Wallace's work. Libra, about Lee Harvey Oswald, is splendid as well, but the real masterpiece is Underworld, a complex work, a sprawl, if you must, but one with command of the extended metaphor. I think, anyway.

In all instances of this novel, there is one ultimate failure of quest after another as the characters strive to engage the recent past in someway that gives the passage some inferred meaning, a hint of sense that reduces the perceptible anxiety that the characters are all aware that they are yet another day nearer death, and finally alone in the dark, a cipher with no God to go home to. Underworld is less about what is found on the search than the reasons for the search itself: the comedy and the tragedy comes with the realization that the characters never understand that the process is what gives them definition, not the goal they seek.

Both authors wonder what went wrong, and seek the language, the metaphors, that can describe the loss, and perhaps give us pause to make sense again of the eviscerated cosmology. That both writers have stressed a quest, of sorts, at the heart of their post modern fictions nails their relevance in place. The search ultimately collapses, as it usually does in credible fictional stretches, but the relevance is that the language of the writers, of their characters in situ gives us ways to think about ourselves: it furnishes us with an imaginative vocabulary that is revitalized beyond the easy-street defeatism that lurks behind the present vogue for unearned irony
at June 24, 2009