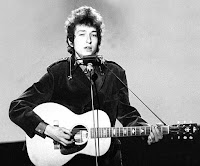 Cambridge University Press,is coming out with booked titled The Cambridge Companion to Bob Dylan , the intent being, one supposes, that august institution wants to enshrine Dylan at last, accepting him into the Canon. No doubt I will purchase the volume and read closely what a generation of critics reared on Dylan's lyrics will have to say as they make their respective cases for him being a poet worthy of being placed alongside Milton and Eliot. I fear, though, that a good many of them will miss the point of what's been exciting about Dylan's work, that it is, after all, rock and roll. Rock and roll is always worth discussing at length , through as many different filters as possible, but one fears that too many critics, desiring to sound academic , ie, "legitimate" as they bring their learning to an analysis of the songwriter's work, will forget to achieve that state of accelerated insight one discovers in the best of Greil Marcus and Lester Bangs and instead convert their passion to tenure-seeking jargon.

The problem with a number of literary treatments with Dylan's work , I find, has the error of sticking too closely to Dylan's lyrics and attempting to align him with the supreme examples of our poetry. Although these articles are fancifully argued much of the time, Dylan winds up suffering, as there is, I believe , more that contrasts than favorably compares. His language, in itself, hasn't the stuff that sustains a reading that would seek a system of allegory and metaphor that approaches Blake. The lyrics are a bit flat in that sense, limited in dimension, mainly because the writing we consider is not poetry, a medium that can achieve verbal effects on an unlimited number of levels. Dylan's words are lyrics, and their effectiveness, their power lies in the music gives them life.

A straight reading of "Desolation Row" would give the feeling of some intriguing surrealism sadly constrained by a sing-song rhyme scheme. The song , though, changes everything, from the steadfast, aggressive strum of the acoustic guitar, Dylan's vocal performance (snarling, dead pan, phrases bitten off in reserved disgust), guitarist Mike Bloomfield's bittersweet improvisations and the careening harmonica solos add a power not attained by a close reading of the lyric sheet. Greil Marcus, who has been guilty of summary vagueness on the subject of Dylan's Greater Importance, is , nonetheless, superb when he confronts specific Dylan songs, convincingly getting across how the conflated traditions Dylan brought together--folk, blues, Tex Mex, rock and roll and Symbolist Poetry, produced something new, strange and transcendent. He could grasp at how these things worked together for their artistic power. I am afraid, though, that the Cambridge Companion could suffer from a surfeit of specializations that too often have little to do with edification. There are some writings on Dylan's work that are as exotic as the singer's most intangible imagery. An example, cited by the Boston Globe and on Ron Silliman's blog, suggests a turgid time awaits even the most faith Dylan partisan:

"Dylan's lyrics construct an author-reader relation posited on the model of an irresolvable enigma which is both the incitement to and the perpetual frustration of readerly desire."

One had reason to think that rock and roll lyrics were truly the poetry of the age, but hindsight reveals the hubris of youthful assumptions. Far, far too little of the work by even the best lyricists have approached the wealth of expression and style that page poets have managed, even up to the current day. Dylan is not Wallace Stevens, Tom Waits is not Blake, Leonard Cohen is not Shakespeare, Joni Mitchell is not Auden. What needs to be developed is a critical language that can discuss, at length, the work of these songwriters as songwriters who assimilated aesthetic values from poetry. Otherwise I think we're all missing the point and blowing so much smoke up each other's pant legs as we drone in platitudes about how rock lyrics are the poetry. It misses the mark entirely. Lyric writing for music is a distinct craft from than that of the tradition of the page poet. There are points, of course, where the traditions converge and perhaps borrow from one another, but not often enough to willy nilly refer to gifted songwriters as poets. The work that really needs to be done in this area is to expand how one discusses the art of songwriting. Dylan, Paul Simon, Mitchell, Costello, et al, are better referenced against the likes of Stephen Foster, The Gershwins, you name it. Dylan, I would say, has had a very minor effect on contemporary poetry--the revolutions we habitually talk about here in modern verse were well under way long before he even picked up a guitar. His real impact is on music, on songwriting, on rock and roll.It's is his profound influence on popular music that helped changed American culture, and it is in this area that his artistic legacy is based. At the end of the day, Dylan remains a musical artist, not a literary one.


It's not every attempt to place Dylan on a par with canonical poets without insight or mired in a nervously applied jargon. Some are superb pieces of critical thinking. Even Christopher Rick's unfairly mocked, high-level inspection of Dylan's work in his book Dylan's Vision of Sin at least speaks to the reader in comprehensible prose, which greatly mitigates the thin air he's attempting to take deep breaths in. Michael Gray's study, Song and Dance Man: The Art of Bob Dylan , brings a thoroughness to the subject matter, bring focus on a multitude of influences Dylan absorbed and used t create something new. Gray spends his time on the lyrics and performs some impressive maneuvers to make the lyricist a suitable companion for the page poets, but what makes Song and Dance Man especially powerful is the stress on how the music ratchets up the power of lyrics . He writes, in this book, like a Greil Marcus who doesn't get quickly distracted from completing an idea.

The cited sentence has none of that--it seems a foul odor emerging from a long sealed crypt.Dylan deserves better than the crypt, of course, and I'll pay my money to see how the folks at Cambridge did assembling the best thinking they could find on Dylan's hard-to-classify work. Until I buy and read the Dylan Campanion , of course, my question, to risk using a metaphor a third time too many, is whether the songwriter will be illuminated or embalmed.
at June 13, 2009