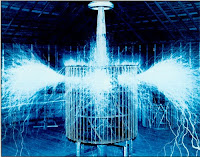 Written in response to an email where I was asked what I thought the distinctions between Science and The Arts were. An impossibly broad question to answer succinctly, but I did have a fine time distilling my generalities into three action-packed paragraphs.-tb
_____________

The difference between science and the arts is that the sciences, the hard sciences, are predicated on facts, hard, verifiable data culled from methodical research , stated in the form of theories , ie. Scientific methodology provides as well a mechanism for verifying both the data and theory that gives them an articulate expression. If there facts are found that do not fit an proposed or an accepted theory, then the theory is changed, or junked altogether. Science, we can say, is very material, in it's subject matter. It deals with the physical world and the observed universe as it's originating source; even those speculations that suggest a metaphysical dimension, as often seems the case to layman in advanced physics, the suppositions are based on commonly vetted particulars.

The arts, as in literature, painting, sculpture, drama, film making, dance, have to do almost exclusively with the imagination; although the genres base their projects on experience and what is observed in the world around us, the emphasis isn't to add to the body of knowledge by developing explanations as to why things work the way they do, but rather to create, convey, communicate the subjective experience of the world however it might strike the individual artists. To coin a phrase, results may vary from artist to artist, but the philosophical premise of art making , in the broadest and most diffuse sense, would be to investigate the realm of appearances and what those perceptions seem to suggest on levels that, in themselves, aren't measurable. Scientific investigation , of course, requires imagination and a certain artfulness in the application of disciplines that uncover the real connections between substrates of existence, but facts and statements about facts remain the goal.

The further point is to produce advances in technology, based on more complete understandings of what wasn't as clear before; a further point is to discover things about the world that are useful. The arts, regardless of medium, cultural origin, or political-religious apologies, deal in major portion with the way the world seems, the aim , perhaps, to fulfill a human desire to feel at home in this existence. Beyond that, Oscar Wilde said better than anyone , in his preface to The Picture of Dorian Grey:

"All art is quite useless".

Email ThisBlogThis!Share to TwitterShare to FacebookShare to Pinterest
Labels: generalities