After the Service: Moans of the Embalmed 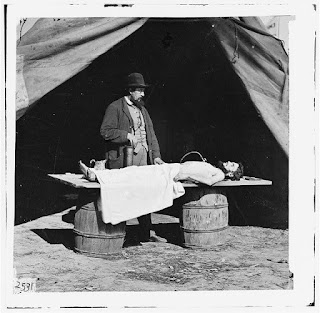 Clumsy titles don't grab me at, but it's useful to see if the ill-phrases follows suit in the actual work. Fortunately, J.Allyn Rosser's poem After the Service, the Widow Considers the Etymology of the Word Salary transcends the gabby quaintness. For starters, I would have junked the original title of this poem had I written and instead stared at the finished piece for a few moments, finally relying on the old trick of making the last full phrase of the poem the name of the piece. In this case, "Sighs for My Meat". Odd, strange, a communication from someone who can't find the words, this alternate title fits the Eliotesque tone of exhaustion, ennui, boredom that barely conceals the feeling that inevitable death is catching up with them. Private language is not always an element that makes for a good poem-- too many poets, at every level of skill and ineptitude, consider the purposeless disguising of meaning , or worse, clumsy, abstruse phrase-making, as enough to make a poem and to force the reader to commence with the equivalent of an archeology dig for the treasure--but Rosser, like Eliot, doesn't obscure the emotional context of her subject. One is, of course, compelled to fill in the blanks, but we do get the gist, we get a crystallized essence, that of a someone alone, after a service, returning to the daily rituals and routines where the familiar things are made strange, foreboding.

This morning began like anyone's:
coffee. Mine a bitter roast
too weak for the daytime
that keeps me up half the night.


Nothing seems to bring her out the stupor of half-sleep; the coffee, meant to energize and give purpose to one's day, only ruins both one's waking hours and the time of one's slumber and tastes bitter besides. The days ahead are approached with caution, a creeping dread that changes the flavor of what's in the cabinet.

Back home, I liven things up
by microwaving popcorn:
an edible jazz I feed to the trash
for our walk to the curb.


The small matters that might have given a lightness to the day now seem a burden and all one can do is improvise around the rituals that made home life a joy in the recent past, but it is insubstantial, a bit of business that's an attempt to distract one from the core set of anxieties their thoughts keep centering upon. All the things we make become waste, all things of this earth return to the earth.

At the end of the day, one shadow
seems made of a deeper gray:
have I somehow earned this
by refusing for years to fear it?

I was speaking to a friend the other night on the matter of aging and he, a robust 70-year-old, remarked that he is at the point in his life where half the people he's ever known, those his own age, are dead. To combat his despair, he remains active: his hand goes out toward new friendships all the time; at times this seems like a mild mania he suffers from and one wonders how convincingly he can become best friends with a host of associates he's known only scant years and who, generally, are fifteen to twenty years his junior. But he smiles, this man who's been to many funerals, he is gracious, he is engaged with his world and community and he, perhaps, has found something that essence that of attitude, of spirit, that prevents the objects of his world from becoming harbingers, reminders, latent symbols of demise. But Rosser's speaker hasn't this resilience, a creature of habit for whom the familiar items seem merely to taunt and withhold truths. There is a parsing of the words one uses to describe their quality of being--a dissection, in other words, of something that is already dead.

Here at last my martini
embalming its hollowed olive,
and, as apparently originally intended,
salt for my salary, sighs for my meat.


A martini, embalming, a hollowed olive, the price one has paid for their life, salt for the meat, we have a language that finds itself conflated, with meanings and emphasis spilling over one another, a pickled narrator pondering the inevitable from the standpoint of something that is not living in any vital way but merely preserved. Rosser's language is masterfully exact in the sort of round-robin associations these bouts of pronounced foreboding can bring. This flesh is scarred, embattled, without a determining will to make a change this late in life, this flesh is tired, wounded. This is the internal narrative of someone waiting for the other shoe to fall.
at April 16, 2009