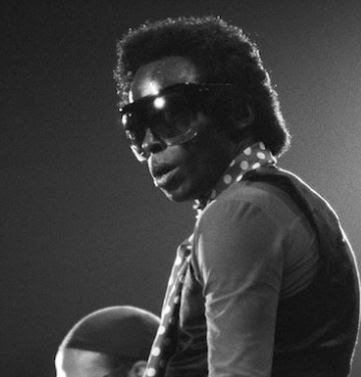 Devotion, an early McLaughlin early solo job has been getting a lot of play around here the last month or so, mainly because the sound is raw and appealing, and what were the obvious beginnings of a commercial sound hadn't had time to become bad habits. Buddy Miles, of all people, acquits himself surprisingly as the session's designated "rock" drummer, though I wonder what the mix would have been like if it McLaughlin had Mitch Mitchell (or Ginger Baker) on hand. McLaughlin's guitar work is a wheezing grind and buzzing of devices and attachments, fuzz tones and foot pedals galore, and his riffs are choppy, sharp, angular. Larry Young is the textural component here, simply a genius on his outre minimalist take in a tradition still in the making.

Electric Guitarist offers up a bit of a recovery of McLaughlin's verve and status after some noodling experimentation in his post-Mahavishnu work. It's something of a resume album, each track with another slew of stellar jazz men and fusioneers --Jack Bruce, Tony Williams, David Sanborn, Stu Goldberg -- playing in a variety of styles ; McLaughlin plays with the sort of frenetic heat that is breathtaking, to coin a phrase; not that he's ever been the fastest guitarist on the block--any number of nimble nitwits play guitar faster than he does with less effect or feeling--but what he does do is use the solo as a blow torch. He burns, in other words, and the neo-Coltrane chase "Do You Hear The Voices", patterned after the obstacle course dash that is the master's classic vamp "Giant Steps", we have the rare time when accelerated improvisation doesn't approximate a balloon going limp in the final stretch. The playing of Stanley Clark and Jack DeJohnette, bass and drums respectively, remind how disciplined these fellows are in the tradition. The metallic distortion McLaughlin brings to this track updates and invigorates a tireless form.

Holds up amazingly considering the years that have passed since I've heard this;  a recent discussion on the value of the electric work of Miles intrigued me enough to listen to a  succession of his pioneering jazz-rock releases, coming finally to At Fillmore, which came as something of a revelation. As much as the trumpeter's later rock/jazz/funk fusion tended t resemble a triple large unpressed suit, Davis makes it work with trumpet work that's bold, brassy, snarky and snaky all at once as he darts between, over and through the churning keyboard dialogues of Corea and Jarrett. Jack DeJohnette and Holland are a blistering rhythm section here; the drums and bass patterns achieve the impossible, maintaining a rock beat and firm bottom that avoids the supreme tedium lesser rhythm sections contrive. Part of the joy of this early electric jazz-rock experiment is the lack of obvious heads or signature riffs that keep the music well mannered, orderly and constricted, as well as the loose ensemble fit. There are times that it seems the band is hopelessly lost in a riff fest, going toward the cliff at quick, shambling pace, but all that is deceptive; this a discipline with a different philosophy and use. This is a choice purchase.
at February 28, 2009