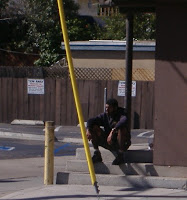 Sometimes you can concentrate on something so closely that the thing or the idea becomes abstract, blurred or jagged at the edges, a layering of form and sound that makes for a crowded, frame busting tableau. "It Takes Particular Clicks" by the adroit and terse Christian Wiman makes me thing of a walk through a familiar set of scenes that are closely observed but briefly referenced, suggesting something of the narrative stream technique Virginia Woolfe employed in her novels Mrs.Dollaway or To The Lighthouse (among others),There is something odd and detached here that makes me thing of someone floating through an experience, as with Woolfe's prose at it's most sensory rich, Wiman's poem skips and jumps, highlights and moves on to other details. Woolfe, though, awarded her readers with a flood of associations, the world of hard substance negotiating terms with a mind attempting to frame and contextualize the minute particles of the everyday;It is an impressionistic undertaking here, and the way things seem to be as one passes them can be influenced by any one of many moods one experiences in a short order. Fine, I think, but what's splendid of your review is your attention to Christian Wiman's creation of sound; this poem has a soundtrack of clicks, scrapes that underscore a psychological restlessness that narrator/dog walker finds himself in. This is a noisy poem about a brief visit to a noisy world, and you've done a nice job assembling your examples. Good criticism here.
.Wiman's poem is more a fast , hard rain in spring. The briefness livens the nerve endings.

Flip-flops, leash-clinks,
spit on the concrete
like a light slap:
our dawn goon
ambles past, flexing
his pit bull. And soft,
and soon, a low burn
lights the flight path
from O'Hare,
slowly the sky
a roaring flue
to heaven
slowly shut.


This is a poetic situation captured in compressed essence, not enlarged, glorified, vulgarized, made philosophical, but presented instead with a flash-card alacrity Sounds against a sidewalk soon rise above as would a responding lift to note air traffic and the sky that is several tones of cloud-coded atmosphere.
At first reading they seem a jumble of incomplete thoughts, but you've gotten the sense that this is a poem of a mind in full stride through a familiar terrain. Perhaps a bit like the scenery that rushes by a passenger window, the recognition of details nesscarily conflate and color each other in succession, but there is a coherence here; noises, distractions, from planes to speed bumps and the seem to make the walk a peril for our narrator, who seems constantly to be catching with himself ; the onslaught of images and their contextual framing seems constant work. The dog he's walking, though, is unperturbed and is determined by instinct to locate what it's senses have locked on. The shape and meaning of the world changes with each step, but a dog remains a dog and will do what dogs do during walks on neighborhood streets, and in so doing brings a focus to the onslaught, provides the reason to stop, reassemble one's rattled senses and make a statement about the experience: Good girl.

There is a pull of many things on one's attention, and the effort to recognize, categorize, acknowledge the information from a familiar neighborhood walk goes efficiently, the things themselves in curt terms, associations hinted at, suggested, the walker moving along, persistent in their path.

Here's a curse
for a car door
stuck for the umpteenth
time, here a rake
for next door's nut
to claw and claw
at nothing. My nature
is to make
of the speedbump
scraping the speeder's
undercarriage,
and the om
of traffic, and somewhere
the helicopter
hovering over
snarls—a kind
of clockwork
from which all things
seek release,
but it takes
particular clicks
to pique my poodle's
interest, naming
with her nose's
particular quiver
the unseeable
unsayable
squirrel. Good girl.
This string of scenarios unfold quickly, in steady stride, and there is an attending narrative for each thing and a cogent linking between the very different items of speed bumps or the odd thing his dog uncovered during the time on the leash, very little of it explicable , but all of it coherent; this has the eliding sway of a narrative with small notes, cryptic asides. Not as cinematic as John Ashbery's associations have been, but that, I think, is the strength of the poem; Wiman minimizes rhetorical intricacy, concocts a shorthand which suggests unsaid pleasures or private disgusts, and creates in doing a collage of signifiers, the smallish incidents and contents made extraordinary in their banality. This is something akin to the old Modernist's decree that language be treated not as the audible sighs of a wise God speaking directly to us, but instead as a hard, malleable thing; Wiman's style has the mashed together beauty of junk sculpture, the condition of things that were formerly utilitarian and explicable in design and purpose but now, mashed together, cogs, gears, fenders, trash compactors and steak knives pressurized into a furious, creviced cube, approach an organic unity.
at February 11, 2009