UPDIKE AT REST: Our Best Novelist is Dead: 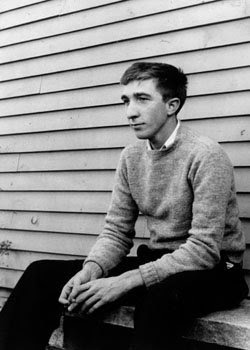 We've lost one of our greatest novelists, John Updike, who died of lung cancer at age 76. Norman Mailer, in a breezy dismissal of Updike's novel Rabbit Run, called Updike the sort of writer who was popular with the mass of readers who knew nothing about writing. Mailer's withering glare, though, was notably fueled with obvious envy (brilliant as he was, the late writer was always obsessed with his literary competition), and what the departed Updike leaves behind is one of the most impressive bodies of work a contemporary writer, American or otherwise, would want for a legacy. His Rabbit quartet of novels--Rabbit Run, Rabbit Redux, Rabbit is Rich, Rabbit at Rest--is among the peerless accomplishments of 20th century fiction in it's chronicle of living through the confusion of the Viet Nam war, feminism, civil rights and the sexual revolution in the person of the series' titular character, Rabbit Angstrom. Not deep of thought but rich in resentment, Angstrom was an analog of American culture itself, a congested vein of self seeking that never recovered from the raw sensation of youthful vigor; Angstrom, like the country itself, resentfully fumbled about for years ruing the loss of vitality and trying to replace it with new things, the crabby possessiveness of the middle class.

Updike had been criticized, as had Nabokov, for creating characters who weren't sufficiently heroic in their suffering or sympathetic to any degree, a charge I considered a dodge against the dicier matters of personality Updike was fascinated by and lovingly detailed with his poetically charged sentences. The seduction and allure of Updike's prose was the lush and bittersweet tone he could manage while following the curious circles of sense seeking his creations walked in--within any scene, whether a room, a church, a middle-class home decorated in conflicting schools of tackiness, there would be an order things established, material goods contrasted against modified and enhanced surroundings that would offer up a vivid sense of how intoxicating, self-convincing a character's thought process can be. Updike, though, didn't trust perfect scenarios or theories as to the meaning of life and was well aware of the human quirk that seems compelled to foul the nest with self-seeking. Comic, cruel, resonating with moments that are suddenly enlarged beyond the inane doings of his sweetly deluded antagonists, Updike was the voice of the problematic white straight male libido. Everything was sex drive--love, business, politics--and that realization alone is likely what gave Updike so much material to write books about, captured in an unequaled six decades of novels, short story collections, plays, and essay collections. John Updike was that rare talent who had the capacity of vary his approach to novel writing and still remain vital, alive--the ratio of how many of his novels worked aesthetically and worked structurally within his constant experimentation with form and voice is astounding. What is amazing, as well, is how vital his novels remained as he aged--Terrorist (dealing with the obvious issue), Seek My Face (a novelization of the life of Jackson Pollack), and Gertrude and Claudius (a prelude by Updike to Shakespeare's Hamlet) among others show a fictionist of endless curiosity about things topical, historical, outside his own famous niche of New England suburbs and small towns. Tom Wolfe accused him of being among those American novelists who've missed the vitality of real people, preferring instead the easier job of writing fanciful "writer" works, but that's the sort of comment that shows that Wolfe wouldn't let the facts ruin a chance to pour gasoline on a burning resentment.

Updike, gain truth, took the pains to research a number of novel ideas and then imagine a world where the characters would live--his range of subject matter leaves one breathless. Joyce Carole Oates impresses us with her energy and her sheer productivity, but one doesn't escape the feeling that she's written the same story, with variations in tone and width, at least sixty to seventy times over in her three hundred plus volumes; Updike, a little slower yet still prolific with fifty books, left his comfort zone and applied the novelist's craft to those situations and people he felt had a story worth telling. So too comes his criticism and book reviews, which seemed to make remarks from any number of writers and subjects; his willingness to consider fiction an expandable craft made him one of the more trustworthy reviewers we've had the good luck to read over the years.

If a writer's task is, among others, to help us understand the actions that cause us to fall down and act badly despite our best intentions, Updike has performed a patriotic service. There should be some prize for that.
at January 27, 2009