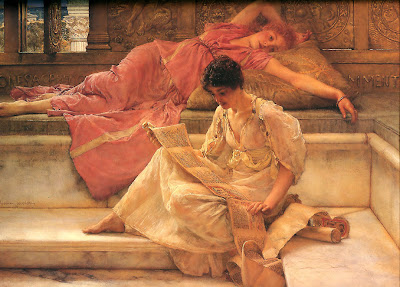 Just got off the phone with someone who decided to make their nominal inquiry as to how I was doing after a-long-time-no-see into a springboard to revisit some old resentments. Poetry came up in the course of a miserable (and loud) stumble down Memory Lane, art and practice she found effete. "You're a snob and you're an elitist and you never listened when I--" I was puzzled, of course, but that's what I get for having the same phone number for over a decade; folks can revisit you and either get square with you or start the wildfire once again. Anyway, I resented being called an elitist. But maybe that's not a bad thing (within limits, of course).

Poetry has been an elitist practice for decades, and the efforts to bring a larger audience into the fold and investigate the diversity of verse styles is a good thing, regardless of the misgivings of the abstruse few. I doubt books will vanish, nor that experimental and radical writing will cease; more likely, such forms will most likely gain readers because of efforts to get buyers to invest in Dorianne Laux or Frank O'Hara instead of Mitch Albom or Dwayne Dyer. It's likely that exposure to poetry and the creation of desire for it where none existed before would eventually get a larger audience for things that are edgier, more experimental, strangely political. The anti-poetics that flourished in the last century might gain an audience not composed of other wayfaring artistes and institutionalized revolutionaries who nod and chuckle at each botched and confounded pun and labored sarcasm. Contempt is fine when it's reserved for those who are perpetrating objectively loathsome agendas on their fellow citizens, such as rationales for social, economic and physical violence of any sort; justice is a quality that must be fought for every step of the way, and a honed contempt is a part of the mix of responses that would fuel you to oppose the tangible elements of evil. Poetry you don't like isn't a tangible evil, it's only a difference of taste, and tiresome derision on the level of blistering invective does not prepare one's community for A Perfect World; it cheapens discourse, rather, and makes the prospect of writing and participating in poetry essentially the same as inviting someone to have a free sock-in-the-jaw. Why would one lean into a left hook they see coming?

And why would an aspiring poet bother with taking up this essentially unprofitable art if there's no standard for conversation, criticism, disagreement? It shouldn't be strange to anyone why many of our best writers are forsaking poetry altogether, and even skipping novel writing and instead situating themselves in various nonfiction categories, areas, alas, where there are readership and the sort of feedback that appraises worth sans the desire to impale every perceived sinner against a vague notion of worth. Perhaps it would be an audience that might ask what it is Bernstein and a few of his friends are trying to do. Such an audience should be prepared to roll up their sleeves; not every verse is Billy Collins, transparent as acrylic. The words we use and the sounds we make to get across subtle blends of the sublime, inane, blessed and evil is strange enough to consider, and one is refreshed by having their memes and phonemes challenged by way of being made even odder. Language poetry is an honest project, I admit, and I've been taken with its peculiar power as a method, but there is a point where the personality has to surface undiluted with theory, which such a hypothetical readership would demand.
at January 23, 2009