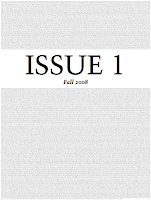 The poetry blogosphere has been abuzz with the doings of some folks who've promised and finally delivered a massive, nearly 4000 page PDF file promising the work of many, many, many, many poets. In fact, the list of who would be featured in this work, from a blog that's named itself with unspeakably obvious literary reference, seemed to include every poet who has a blog, myself included. With delivery of the down loadable file, I quickly searched for name and the poem I supposedly submitted to editors I've never spoken with.

I was will to suspend any disbelief I had thinking perhaps that those folks had cribbed a choice verse I posted to my poems site , or some other place on line, usually obscured by word clouds. No wish fulfillment here, as the poem was something I didn't write. Not that I'm all that smokin' a poet, but the poem attached my name is rather bad, in the way one writes an awful set of stanzas on purpose. And lo, it turned out that I wasn't the only listed writer who hadn't composed the verse assigned their name; you can view the down loadable file here and read through the responses as well at the website where this hoax was perpetrated.

The project is not about what poems "belong" to an author as much as how many authors there are on the Internet who regularly check their status in the blogosphere with periodic Googlings of their name. The sheer quanity of names here, my own included, rather assured the instigators that there'd be a sizable , blog heavy response. It's a Dada gesture and a provocation made with the intention of upsetting a good number of poet's sense of themselves as autonomous agents and authors of their own experience. On that account, the anthology, fake poems and all, succeed famously. The aesthetic effect is the ripple they create among a scattered group's perception of a single event, small change as it maybe. Further disquisition on the relationship and fragility between the concept of authorship in an amorphous sphere like the Internet is, of course, fascinating, but secondary. It's gravy, but it's npt essential to what these fellas had in mind.Perhaps the instigators are Rove-like neocons who specialize in changing the subject; what better way to make people forget their economic ills than to appeal to their base insecurities. Rove would appeal to a poor American's nervous patriotism, while these fellas mine the thin vein of self-esteem too many poets have. In both cases, the ploy prevents one from the duty of the poet to change reality rather than merely describe or complain about it