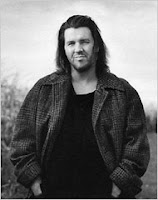 David Foster Wallace wasn't my favorite writer, and I didn't quite "get" the metastatic comedy that was the central work in his short list of books, Infinite Jest, but I did read him often and closely enough in other novels, essays, short stories to see genius, real genius, perhaps the stand alone talent of his generation.He was extremely wordy, prolix was his stock-in-trade, but you kept reading him because he was also brilliantly funny; in this sense Wallace was a true heir of to the late William Gaddis, another genius of long , satirical novels like The Recognitions and JR. Writers like these two are that rare combination of intellectual rigor and approachability; their shared virtuosity was in service to humor, a lessening of the thick clutter that gathers in our waking lives.


At his best, David Foster Wallace is an astute chronicler of the often needless (and fruitless) complications characters create for themselves. In the eight stories that make up his collection Oblivion, he outlineed absurdity, sadness, and sheer comic reality of the outer-edge of consciousness. Fashion magazine editorial boards, consumer research companies, and paranoid office situations are among the areas fictionally explored where human activity fractures into dozens of frantic, nervous tangents. Oblivion is a dizzying, daring set of tales - a riveting virtuoso performance. What was unique about Wallace was that his refusal to be conclusive in his writing, in the sense that a subject ends or a story ends and is finished with when he stops writing. As with a mind that engages life not as framework containing an easily explained and grasped beginning, middle, and end, his prose didn't build to a point to be made, an effect to be had, nor did it perform the artificial dialectic of having it's dualisms come into conflict and produce some unexpected new thing.

Wallace's virtuosity and brilliance at undermining a reader's expectations didn't always justify the lengths he went to in order to set up scenes and digressions.
Much of what could have been knock out prose simply goes limp at length. There's a numbing lack of emphasis in Infinite Jest and The Broom of the System that reveals what one would call undigested research. The encyclopedism is a habit he gained from Pynchon and DeLillo, I think, but both those writers have a since of scale, and a style that reins in the excess: their sense what makes an antic sprawl is better served by their respective senses of proportion, developed, I think, under the the tutelage and blue pencil of editors who were not afraid to hack away what does not work and instruct in the mending of what does.

Wallace has no such sense of scale, and remains a promising talent; he was less a wunderkind than bright chatterbox who, not finding the right words for an idea, uses all of them. This seems to be the case when first experiencing his prose, and one does discern a method, a purpose and a heart that goes with his profusion --he as much as any writer tested the limits to which writing could embrace it's contradictions and ambivalence as the a counter thesis was instantly presented any discriptive/perscriptive remarks he might offer. He was a "systems novelist" like Pynchon, DeLillo and the late William Gaddis, but Wallace's system who nooks and crevices he inspected, invaded and described in mesmerizingly, excrutiating detail was language itself. His prose seemed the equivilent of actual speech, full of stutters, doubling back, purposeful self-contradiction. Indeed, prose and the sentences that mark length was an extension of a mind that will not settled in place; his point was the refusal to have a point. Life was too important to have a meaning behind it all; that, he thought, would be conclusive and spoil all the joy and strange tastes of sadness that come our way between dawn and dusk.


The fiction didn't have a pretense of fulfilling a grand narrative; rather, these were mini narratives we traveled through, formations of the society and the habits of its characters revealed who are at once loosely connected with everything else in the area and yet so close in proximity. His writing was a record of continual process, full of unveilings, small voiced declarations, competing manifestos of how to change the way things are. Whatever DFW comes to be called years from now, he was a perhaps the first post modernist writer to understand irony as it's lived, not applied as a card trick. He was a master, and he will be missed.

Ironic, yes, that Wallace's exhausting "maximalist" style, which seems dedicated to fitting everything in sight into a sentence that contains everything else, works best in his shorter pieces: the humor hits harder, the stretches of associations don't have time to die on the vine.
Wallace could make sentences seem like it were a sentient being with lives and curiosities of their own, touching everything their looping syntax and serpentine rhythms could circle their clauses around, and rarely loose the central premise that commenced the writing to begin with; his writing was something akin to a Keith Jarrett piano improvisation where theme and variation became such fully and forcefully units of energy and execution that they soon became full developed bits of art on their own, with their own terms.

American writing has lost a champion.
at September 13, 2008