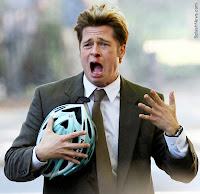 There's been a bit of grousing about whether the Coen brothers have set themselves on cruise control since multi-Oscar wins  for No Country for Old Men,the current evidence being the new comedy, Burn After Reading. It's familiar character terrain for Coen fans, this time focused on a gaggle of Washington DC nitwits and imbeciles who try to get the upper hand when a canned CIA analyst's memoirs , on CD, is found by an attendant on the locker room of a local gym. What follows when the CD gets into the hands of two inordinately self-seeking body trainers, wonderfully kinked performed by Francis McDormand and Brad Pitt , is the sort of comedy the Coens excel in, a detached though acute view of a many characters operating agendas from myopic cocoons who are frantically pursuing their own ends regardless of consequences. Theirs is a comedy of situations where nothing is thought-through by the characters, everyone is looking for the short cut, and all the assumptions crash, burn and sometimes are fatal when the gravity of collected self-regard takes hold and takes over.
Their genius is to make you laugh at all this no matter how unsympathetic the characters might be; the unsympathetic nature of the figures in Burn After Reading is the charge leveled against the brothers this time out, as well as some complaints that they're borrowing from their other movies, particularly Fargo and Oh Brother , but to the first challenge mostly I'd counter that being able to "relate" shouldn't be the sole basis to enter a film's narrative. What matters is how well matters are brought out, made compelling; Burn is compelling, if nothing else, but more so, it is a film by masters. They are are practioners of Hitchcock's techniques of voyeur-noir --their camera notices everything, notes each gesture, figure of speech, constructs different scenarios as to where the plot might go, and then allows a particularly fragile house of cards to collapse.
Shallow as they be in life's purpose, their quirks, their world views are fully delineated and detailed. This has the sort of aesthetic remove that made Nabokov an effectively satiric novelist; wouldn't a Coen Brothers' version of Laughter in the Dark be an ideal match up of sensibilties? Nabokov, always in love with people's schemes , their rationalizations, and the erotic inflection when lust and avarice influence the chatter and buzz phrases, would like the Brother's merciless technique and distance; he'd appreciate the way their movies can get in close without embarrassment in order to expose a huge vacancy where something like a soul should be.
You remember that humorless Brian dePalma turned Tom Wolf's dyspeptic novel Bonfire of the Vanities into a fat, trudging monster that turned the author's flinty wit and lacerating details of New York greed and class where the wounds inflicted were secondary to everyone being manic and mirthless for all the tortured reasoning their obsessions required. There wasn't a laugh to be had, and you merely experienced unpleasant folks at the expense of the time you might have spent doing something more interesting. Had Joel and Ethan Coen helmed the screen adaptation, one would be singing their praises further for maintaining a balance between the audience's voyeur like interest in what is none of their affair and the nearly clinical portrayal Bad Faith as a quality no sympathetic spin. As is, however, Wolf's book suffered the fate of being another of dePalma inflated galleries of borrowed camera styles and Joel and Ethan have fared well enough without him. Duncan Shepard, film critic for the San Diego reader and one of the better essayists on film matters Coen has a punchy, succinct and on-target review of Burn After Reading here. It's significant, as Shepard is America's fussiest film critic; fair, and hard to please.
Mostly, far beyond the aspect as to whether I find sympathy with a film character is whether the project is fun. Art of any sort has to be fun , which isn't to say fun on the level of the playground, but more with whether I regret the time I spent engaged or not."Art" is massive set of aesthetic activities that accommodates a lot of agendas in its generalized practice, the practice of "having fun" not the least of them. "Fun" is that sense of something that engages and provokes in someway a facet of one's personalty that makes up the personalized and skewed way that one understands how the world works in actual fact. Whether Cage piano recitals, James Carter solos, Fassbinder film festivals, or whatever gamier, tackier sounds cleave to ones' pleasured ganglia, the quality of fun, that fleeting, momentary state that defines an activity, is why we're attracted to some kinds of music , and not others. It's a legitimate definition for an aesthetic response, but the problem comes in the description of the response, the articulate delineation of what made a set of sounds "fun".
The point, of course, being that everything that is entertaining or distracting from the morbid sameness of daily life cannot be said to be exclusively in the domain of the willfully dumb, conceived in a massive expression of bad faith: what is entertaining, from whatever niche in the culture you're inspecting, is that activity that holds you attention and engages you the degree that you respond to it fully.
"Fun", in fewer words.