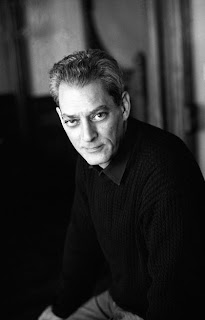 This short missive might seem ironic to the few who are acquainted with my sticky objections to self-reflective writing. My objection remains, but there are exceptions to the rule, always, but there are those who are able to write with imagination and wit while obsessing over writer processes and perspectives without excluding the general readership. Paul Auster's style is so clear of superfluous adjectives, verbs and dead weight qualifiers that he gets across some of the mystery involved in composing a verse, a quality that eludes other writers. A novelist by trade, Auster's fiction often fashion themselves after mystery novels where every assumption and cover story is questioned, and in which action is moved forward by chance; whole chains of events and consequences in his best fiction-- The New York Trilogy, Book of Illusion, Leviathan-- that depend on the fickle choices of where one desires to place themselves, on impulse, on the spur of the moment.

No one here,
and the body says: whatever is said
is not to be said. But no one
is a body as well, and what the body says
is heard by no one
but you.

Snowfall and night. The repetition
of a murder
among the trees. The pen
moves across the earth: it no longer knows
what will happen, and the hand that holds it
has disappeared.

Nevertheless, it writes.
It writes: in the beginning,
among the trees, a body came walking
from the night. It writes:
the body's whiteness
is the color of earth. It is earth,
and the earth writes: everything
is the color of silence.

I am no longer here. I have never said
what you say
I have said. And yet, the body is a place
where nothing dies. And each night,
from the silence of the trees, you know
that my voice
comes walking toward you.

White Nights likewise comes across as a detective novel, combined with a ghost story; within in it are the themes of someone writing something in isolation wondering if anyone will read, how anything will change if a readership is found, how the writing lives on in the writer's words haunting a stranger years later, in another part of the world. This would the poetry Don DeLillo would write, I think if he were more attuned to the associating residue the covers a landscape or neighborhood that was once familiar but is now estranged by time. There is a novelist's precision in declarative statements like " The pen moves across the earth: it no longer knows what will happen, and the hand that holds it has disappeared " that mimics perception itself, how something beheld can seem so clear and self-contained to its purpose, place, and use and yet morph from the particular to a swirling ambiguity with the slightest alteration of mood.

It comes, finally, to that flashing recognition a reader experiences when the words of another voice confirm some trace of feeling one has felt in their travels through an amorphous existence. I think the poem is lovely, compelling, finally undecidable to final meaning. But that is the whole point, I would think.