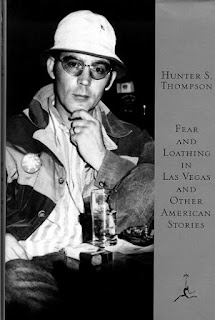 Some time ago I was trolling the cable channels in search of a distraction from chores when I chanced to land on HBO on Demand . As nothing else was intervening in my choices, I scrolled through the movies that were available, the usual assortment of titles I didn't see in theatres because they looked overinflated and underfed in the trailers, or the movies I had indeed seen and had little interest in viewing yet again. The usual cable dilemma, 5oo channels and there's nothing to watch.
Still, I clicked just a couple of movies further and came upon something I missed, Terry Gilliam's film version of Fear and Loathing in Las Vegas starring Johnny Depp as the late Hunter Thompson and Benicio Del Torro as his companion, the drug addled Dr.Gonzo. "Addled" is the perfect term for the film; Thompson's book of the same title is an hysterical little masterpiece of drug use and paranoia where all of the writer's bullhorning, arm waving prose came to 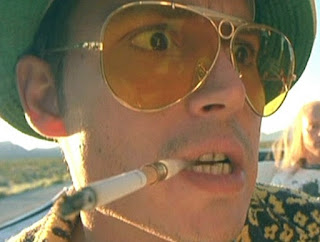 effective use. One did feel the paranoia and intensity and drew a manic laugh from the insanity. Gilliam, though, is the bluntest of directors and attempts to recapture the mania of Thompson's prose with a jumpy, fidgety, quarrelsome visual style , terms that describe Depp's portrayal of Thompson. The film tanked in an attempt to recapture an old thrill, and so it goes for Thompson's body of work, many years of diminishing returns on the old reputation. Now and again I'll pick up a book I'd read and enjoyed years before just to see if the thrill of a writer's prose is still possible to experience after my taste and expectations have been shaped, that is to say whittled down by experience, whether bitter, joyous or indifferent. Some writers still have that knock out punch in their old books--Mailer in An American Dream and Miami and the Siege of Chicago, , Hemingway with In Our Time , among many-- and other heroes have fared less well in passing time, like Lester Bangs, Charles Bukowski. No surprise; in my mid fifties, I'm drawn to the deeper lyric in the words that cross a page, the tone that transcends the moment of excitement and which continues to ring clearly as an example of writing that gets its moment exactly right. A recent re-read of Fear and Loathing in Las Vegas by Hunter Thompson was this sort of book, from its famous hellhole-on-wheels opening through its arch-paranoid escapades at a Las Vegas Narcotics officers convention; for all his death wishing and self-absorbed daredevil-ism--a revolutionary without a program--Thompson wrote the last word that need be composed on the matter of living off the edge. One wondered, even while young first confronting Thompson and his extreme manner, whether he would fall off that edge,or if someone would push him. It can't be that much of surprise that Hunter Thompson cashed it in the way he did; the only question to ask is why it hadn't happened sooner. He was a case of Hemingwayism affectation gone mad on crack cocaine, that one's challenges were one's character, and that the unwritten essence of a personal code was formed by how well one surmounted one crisis after the next.

It was always about struggle with Thompson, the struggle to meet deadlines before his drugs kicked in, the clock running out before a deadline would look again and he hadn't written anything but a paragraph of zonked gibberish; like Kerouac, who he admired greatly, he came to document less the event he'd been assigned than it was his own chronicles of using his body as a testing ground for new and improved abuses. You might say that he regarded his mind as like a car he'd continually try to ratchet up, jack up, juice up in the hopes of getting the engine and suspension to take a sharp corner faster, meaner, noisier, with the thought of eventual disintegration for the moment blocked out by the sheer mania and exhilaration that such speeds and near misses give you. But his mind fried, he wrote less, he mumbled more in public utterances and talks, he broke bones, his manner was a text book illustration of the word "fried".

Hells Angels It was as if the synapses that had fired and given the world and "Fear and Loathing in Las Vegas" had fused the ends of his nerve endings and made it an impossible operation to change style, outlook, and interest. Other writers of similar aesthetic, ala Mailer, Wolfe, found new voices, bigger subjects, subtler means to put forth their arguments with existence. Thompson was frozen in time, attempting to sustain himself on sparking fits of rage and guile, coming up with little that was new, as it must be for an artist to keep a pulse worth beating.The real pisser is that he lived all these years knowing that he hadn't another good book in him. This might have been his biggest pain to endure, and it might have the one he meant to stop once and for all.

I agree that Thompson is an easy target, but then again he rarely missed an opportunity to make himself one. The curse of being a celebrity writer is that one risks becoming a brand name and finds them self encountering audience expectation more than their muse. Thompson became Hunter S.Thompson, Gonzo Journalist , and became something of a buffoon making faces for a paying crowd. The pity of it all is that he had great talent when he put it to work, the result being a small but strong core of books from his body of work, Hells Angels, Fear and Loathing in Las Vegas, Fear and Loathing on the Campaign Trail.

But the act got old and the body wouldn't sustain the paces anymore, and his writing became erratic, cruel, angry, he became a writer eternally dissatisfied without recourse to wit or irony. There was something sadly drastic about Better than Sex, a strange assemblage full of loud declarations and not much coherence; Thompson in his prime could emerge from his comic paranoia and invective and land on an illuminating point. This was all hollow gesturing. The problem, I suppose, was that Thompson never took the time to change his act, his style, to consider a project that would reshape his notion of what constitutes writing. Mailer dropped the third person persona and wrote The Executioner's Song, a fugue -paced saga made of terse sentences, and went on to a later career that still provoked controversy. Tom Wolfe, in turn, became a novelist, a good thing for him, as they mitigate his later essays, a string of missives from a sourpuss. In both cases, to varying degrees, the changes of stylistic venue kept both writers fresh in their old age. Thompson didn't avail himself of the chance.

I don't dismiss him as a drunk and a drug addict, I simply won't discount those things that ruined his talent. We do need to consider him seriously as a representative author of his time, but this needs to be done with it in mind that his biography is a cautionary tale for those who read him, like him, and decide they want to write crazy paragraphs like he did. One would need to emphasise the distinction between trying to write like Hunter Thompson and trying to be Hunter Thompson.
at October 15, 2009