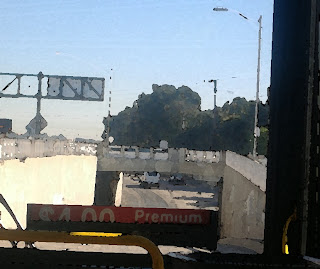 Some of us make sour remarks after confronting a poem daring to be vague in uninteresting and undernourished ways,and the activity, to an extent, is guilty fun;nothing boosts your ego more than having a go at someone else's presumption of their genius. Still, it's a mark of cynicism, unearned and easy to tap, that reveals a unease that has little to do with the poetry itself. A review of my work even as of a year ago reveals the closed-universe strain of poems, the sort where nothing is revealed and not a detail is given to help along, a truly clueless poetry. I am trying to be more optimistic and sunny.

The grousing is understandable since nothing grates in the literary arts than a scribe trying to extend the expressiveness of language by reconfiguring the parent tongue. One may furnish their own examples of poets who've littered their front yard with the clunky scraps of their experiments, and we can all commiserate in a common distaste for the over rated hacks who hide their inability to say write anything interesting behind a wall of willful hebephrenia.

Sherod Santos does something remarkable this week, though, demonstrating with his poem "A Place in Maine" that it's possible to use conventional language, clear images and place the narrative situation in recognizable contexts and still write a poem that is incoherent, indecipherable, absent of interesting particulars or even an interesting turn of phrase. Compression, normally a trait I prefer in short poems (where details are spare and tellingly placed along with terse commentary from the nominative narrator), is the source of Santos derailed intents. There is something going on between the woman at the table and the man who has moved out of her life after several decades, but there isn't anything given to us about the quality or dynamic of their relationship for us to use as a clue where a parsing of the intended ambiguity would yield a reader's useful (i.e., enjoyable) speculation. The poem is spare parts and standard confessional designs dredged from the cyclone-fenced lot behind the Poetry Workshop; the piece sounds written to meet audience expectations as it goes about it’s jerry-built paces. Along these lines, a lack of conviction becomes obvious, with writing that seems nearly a parody of stuffed-shirt language,

It hurt for her to see me see what I couldn't,
in my heart, quite pity. And yet, across the lesser
distance of some forty years, she invites me
over drinks to think how hard it must've been for her.

Involuted syntax would work if there was something remarkable and mysterious to come upon while reading and so give the reader grounds to fathom the ambiguities and undecidable clues an interesting poem could provide, but this gives us none of it. There might be a temptation to consider this telling of the meeting as the account of someone still stunned with the peculiar and hurtful emotions dealing with an aging parent who might well be suffering from dementia and who’s jumps in conversational matter is mirrored by Santos’ absence of connecting detail or segue, but that would be a case of doing the work for the author who could well have strengthened the poem by adding to the writing, not taking away from it. There have been limitless times anyone of us might have sat through open readings where one would-be Eliot after another attempts the rough waters of elliptical reference, battered and bamboozled by one bard after another with violent images, in jokes and contrived melodrama that couldn’t stand up to a harder scrutiny.

The effort could be explained as a suggestion of troubles, conflicts, unresolved dramas that go largely unsaid, but that doesn’t cover it ; even a work that is sparing with the connections between stanzas requires enough for a sense of a desired implication to satisfy a reader’s desire not to feel they’ve wasted their time. Suggest “A Place in Maine” does, but it doesn’t evoke the dread at the center of the poem. Automatic pilot is the key phrase here, with one quizzical element on another as the poet attempts a dense and fine layering of merged complications; these are more like random snaps one picks up from someone’s basket of family photographs. Furnishing your own linking narrative between the various photos of first communions, weddings, and the odd shot of people standing in front of old cars can be as interesting as the images one is given. The elements of this poem are blandly generic with a pretense to more troubled tempests, crystallized by the poem’s last line “You mustn't forget I'm still your mother." This made me think of sight gag of Steve Allen or Johnny Carson taking a drink of water and then spitting it ought when their side kick uttered a confounding bit of nonsense. This is the sort of rhetorical bomb shell one would employ to cast every suggestion and insinuation that had come before into a new and possibly more dangerous light. It comes off as a cheap trick and even an admission that one was writing a poem that required an infusion of intrigue. No soap. No dice. No poem.
at May 06, 2008