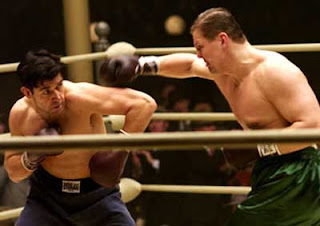 A friend of mine commented a couple of weeks ago that in a time when what we consume in popular culture is so prefabricated , formulated and test-marketed until all potential joy is legislated from it's predictable husk, we tend to praise any movie, band, play, novel as "brilliant" that displays anything resembling a heart or half a wit about itself. Other superlatives come into play as well, like "great", "genius", "masterpiece" and all the rest, and the over rating of perfectly ordinary albeit respectable entertainment goes on. It's a sad and sorry cycle, especially in the case of the movies where the critic's assessments are most readily consumed by movie goers and used to pick the flick to while away the dark with. It's a sad time for anyone who wanted who wanted to write about movies because those that influenced--Andrew Sarris, Pauline Kael, Manny Farber, James Agee--could think cogently about films in their essays. The paragraphs too many critics are dis spiriting; every other sentence reads as if it could be taken out and plastered in the ads as fully servicable blurbs, heavy on adjectives, empty of ideas.

It's a classic case of setting up great numbers of folks for disappoints aplenty: perfectly fine motion pictures like "The Interpreter", functioning perfectly well as classic B movie genre pieces, are saddled with overpraise and hyperbole , written by critics suffering , perhaps, from "irrational exuberance" for a movie that was marginally better than the swill too often served up on big screens. Critical reasoning is out of whack, and films that are fine and dandy without being profound , edifying or in anyway "brilliant' beyond their professionally executed duty to entertain well are not given a proper reading. This makes films age badly.

"Cinderella Man" is certainly a fine B movie project by all involved, and there are plenty of compliments to dispense to all involved here, particularly in the continued fine work of Russell Crowe. He continues to reveal previously unseen nuances in his performances, and here is perfectly fine as a decent palooka who through what's portrayed as a humble Will-to-Power rises above his poor prospects as a fighter in order to provide for his family.Nearly everyone in the film is a decent personage--damn decent, you could say--and it's a compliment to director Ron Howard for not letting the storyline sink under the accumulating bathos. It's perfectly played, laid out, absolutely symmetrical in the way it arrives at the conclusion in which the power of contender Jimmy Braddock's selfless love wins out over the brute strength and Vesuvian rage of heavyweight champion Max Baer. There is a tug at the heart, you choke up a bit, you fret and cheer and applaud with every glove that land's on Braddock's face and every connection he makes with an opponents chin, nose or ribs. Fight movies are the only genre where the skillful director, armed with an able script and smartly placed cast, can make the button pushing moves plausible; Clint Eastwood's recent "Million Dollar Baby" is another example of the human situation being reduced to a few determinist particulars the hero (or heroine) must rise against so that the invisible quality we call Human Spirit can become a plausible thing for us to respond too in ways that are no longer abstract mouthings.

My preference between the two films, though, goes with Eastwood's drama: it veered unexpectedly (but not implausibly) from the underdog storyline and presented an unvarnished tragedy in the making; the situation of "Million Dollar Baby"'s characters was problematized , and the personalities of the characters became intriguingly complex as the issue of assisted death arose as a plot point. As someone has said, everything in the world of "Baby"'s characters changed in minute, leaving the issue of Human Spirit and unconditional love more complicated than whatever cliches that would come trippingly and unthinkingly off a fast, glib, idea-free tongue.

"Cinderella Man", of course, has no such complications, and stays the course towards what is a classic Hollywood Ending:the good guy wins the fight, makes good on his debts, lives a productive and decent life in the glory of American hopes and dreams; what makes it work is Howard's particular genius for narrative rhythm and momentum--the storyline moves ahead with a leisurely swiftness that stands in contrast with Eastwood's remarkable ability to take his time and dwell on scenes without dragging in his direction. This is not, I don't think, a great motion picture--I'll hold out for the superior "A Beautiful Mind" by Howard--but it is a very good one, a finely crafted and engaging bit of professional film making from a Hollywood director who remembers when Hollywood itself made the best movies in the world
at April 16, 2008