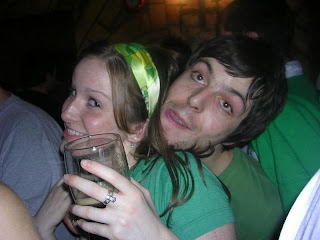 This Tues will be March 17, St. Patrick’s Day, and being of Irish descent those who know my last name and aware as well that some consider me a poet, a lover of words used fully, have started to ask me what my plans were. Who’s party are you going to, what Irish Pub will you be drinking at, what Irish poet will you recite at the Open Reading of Irish Poetry?

Attending the idea that you would want to celebrate a culture rich in the greatest ringing glories of the English language comes the question about how drunk you intend to get, and will you remember the way back to your bedroom at your mother's house if you become unable to utter a comprehensible sentence. There are times I hate being Irish; the jokes at the expense of this culture make it obvious that White European Americans are the only ethnic group one can offend with impunity. The Holiday is a match to conspicuously open can of gasoline.


On The Day itself, many will inquire “Where’s your green?” All these questions on the single topic becomes nagging of a kind, the persistent inquiry into what someone else takes as an imperfection. My imperfection seemed to be that I didn't feel Irish enough. I don’t wear green on any day, it’s not my favorite color, and there’s a deep resentment at others who expect me and any other Irish American to play the shaleighlei -stroking trick monkey with green paper hats, green beads and affecting brogues as bogus as paper forks.

There’s a scene in Woody Allen’s movie “Annie Hall” when his character Alvy Singer berates a woman’s Jewishness with a number of wisecracks at the expense of the ethnic heritage he imagines her identifying with. The woman says nothing and Singer, feeling he’d crossed the line, gives a half-hearted apology for his jokes, to which she replies (and I paraphrase here) “No, it’s alright, I don’t mind being reduced to a cultural stereotype”

This was a “eureka” moment , since it articulated a foul mood I’d been in for years each time St.Patrick’s Day rolled around and Americans, of Irish Lineage and otherwise, rolled out their boxes of stereotypes: green beer, whiskey, green beads, glittered cardboard shamrocks, the whole disgusting offensive lot.St.Patrick's is a day on which those of us with family connections to the Emerald Isle are to relish the contributions of Ireland to the world by way of it;s poets and dramatists and novelists, whether Joyce, Yeats, John Millington Synge or Roddy Doyle and Seamus Heaney, an activity of worth if the proceedings were low key and attentive to what Irish writing sounded like and what cluster of emotions and experience it collectively expressed; it's a literature at war with itself and, as such, conflicts and tensions such as that results in a major poetry. Bombast, bottles and bullshit about all things Irish follow the lip service to the Literature, and St.Patrick's Day becomes no more than respectful of it's cultural name sake than does Cinco de Mayo or Halloween. It's an excuse to drink to excess and behave badly and be a lout. It was assumed that because of my last name and that I made a living both writing and selling books that I would be all over the Holiday and partake in the lugubrious, drunken wallow. I remember yelling at some partying moron with an Italian last name who was doing a miserable Barry Fitzgerald impersonation that I had it in mind to come to his house late at night and do some patently offensive immigrant through a bullhorn if he kept up with what I thought was a cultural slander. Of course he didn’t get what I was getting at, and I never showed up in his driveway to deliver on my promise, but the upshot is that he's never forced his face into mine after that with that wavering brogue.

I resisted the temptation to ask if he did Minstrel Show impersonations for black people on Martin Luther King Jr.'s birthday, as the point was both overkill and would be lost on him.Say what you might about me, but I pride myself on the quality of issues I waste my breath on, a perverse pleasure that might reaffirm the cliche of the Irish being masters of futile eloquence. Doubtful; I just love the sound of my own voice and don't compelled to credit cultural determinism for what is either a gift or a curse( depending on circumstance, inspiration, and the quality of the coffee I might have been drinking when inspired to place a few words on the page, in rhythmic order, declaring war on a latest peeve or pestering pustule of aggravation). It must be said that despite that small country’s amazing contributions to World Literature, I’ve never felt much kinship with Ireland, nor with the native Irish I’ve met. What I've felt like through my life is a middle class white guy, Irish American, emphasis on the American. Irish-American.It's a different tribe.
at March 14, 2009

Email ThisBlogThis!Share to TwitterShare to FacebookShare to Pinterest
Labels: Bullshit