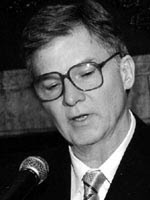 Michael Ryan admires Emily Dickens, it appears, but there’s nothing in his poem“My Young Mother” that comes near the compressed internalization the Amherst mistress created with her jump-cut, cat-footed leaps between ideas. Dickens, for sure, was a writer one stayed with, labored over, argued with in terms of the uncompromising nature of the style, and then and only then grasped her cadences and the burrowing revelations they contained; one was rewarded as well with a stinging wit that was properly lacerating once it was released from it’s coded sheath.


There are, to say the least, considerable rewards for the close inspection of her unusual diction and convoluted construction. Ryan fares much less trying to write with a suggestion of her style—it’s the subject for emulation that is the least likely to produce interesting results—and where Dickens had the skill to keep one guessing, unsure, strung along as to what her point would be or what it was that might be revealed (the peculiar joy of Dickens is the teasing, the delayed gratification), Ryan’s poem confesses his meanings and intents readily. There is no suspense in the game here, nothing that casts a different light on memories that are clear but clouded somehow with intervening events. There is, instead, a mannered and stiff rendering of a childhood memory I can’t help but think unfolds from Ryan with too much detail,

What she couldn't give me
she gave me those long nights
she sat up with me feverish
and sweating in my sleep
when I had no idea whatsoever
what she had to do to suffer
the pain her body dealt her
to assuage the pain in mine.

The writing is too fussed-over, the particulars too polished, the narrative constructed in such a way that one knows that there is a punch line coming by the usual literary routes. Ryan continues an argument he seems to have been having with his mother over the years and finds himself in the grasp of a swooning revelation that a handy device has landed at his feet to aid him in bringing a coherent (if game footed) line to his leftover recollection. He senses his mother resents her requirement to remain with her sick child but remains so through an instilled sense of obligation and duty, instincts she likewise resents.

That was a noble privacy—
her mothering as a practice of patience—
how deeply it must have stretched her
to watch me all night with her nerves
crying for rest while my fever
spiked under the washcloths
she passed between my forehead
and her dishpan filled with ice.

Ryan attempts a feint her with the last stanza, doing as Dickens does by at first seeming to address a subject in a way that suggests a praising tone, and then, against expectation, turn to the other extreme, although in Dickens case, the “other extreme” wasn’t extreme in the writing, but rather swiftly, deftly, ingeniously offered. The effect was of someone changing their mind about someone or something, but credibly so, with some evidence visible from the argument the speaker had advanced in their initial praise of the subject. Ryan’s attempt to address a darker side of what he’s set up in the previous stanza, the conspicuously moldy conceit of the Sainted Mother, is ham-handed at best, and bizarre.

That was a noble privacy,but even then there was so muchunsayable between us, and why this was now looks soludicrous in its old costume of shamethat I wish not that she had justsaid it but that I hadn't beenso furious she couldn't.


We find now that he resents his mother because she was putting her child before her own needs and desires and that she did so without protest, but that the child Michael was sensitive enough, aware enough at the time that she was disguising her true feelings, was, in a sense, being false with him and now he has the lingering simmer of resentment that she couldn’t speak to him , mother to child. There are those folks in various twelve-step programs who “get stuck at the fourth step”, the writing of a fearless and searching moral inventory of themselves where one’s foul deeds, resentments, traumas and what have you are written out with brutal honesty, the goal being that one may face their demons (to risk a cliché) and work through those matters that impede their progress.

The goal is progress, to move on and make a life for oneself that’s worth living, not to assign blame to those who are beset you with life-hobbling “issues”. But there are those many who continue to dig for bones in the backyard and continue to contrive new odious scenarios from scant fragments; it basically turns these people’s lives into conspiracy theories where forces have aligned to make one’s life a punishment. Ryan sounds like he’s stuck on some matters that he would have been better ridding himself of once and for all; the point of an inventory is for an enterprise to rid itself of goods that cannot be sold if it is to remain a going concern. Exaggeration oftentimes benefits a poem that is often the point of engaging in this peculiar form, but Ryan doesn't make me want to suspend my disbelief or to dissociate my sensibilities precisely because the thinly constructed and blatantly contrived nature of the punchline, which was the supposedly stultifying effects of his mother's care for him. The poem is whining, really, the sort of who can't help but feel ennobled by their self-diagnosed dysfunction. It's an easy way to give your life a narrative arc, an original source, from which a limitless flow of causes and effects can be writ, most pat and phony. “My Young Mother” seems to be an example of someone inventing evidence that he’d been done a foul deed; the result is an awkward and ludicrously reasoned poem. Some things can only be written off when all is done, and as someone who manages bookstores, ridding oneself finally of what cannot be made good use is a relief. The tone of Ryan's poem is weepy and woe-is-me, and my experience in the programs I alluded to in my initial post has presented me with those for whom their issues, whether alcoholism, drug addiction, codependency or child abuse, is a form of identity politics. There is a power in the brand, as it gives one a world view and provides a license for one to rummage through their past and invent further originating sources of their dismaying existence. It might well be that Ryan intended anaha! in all this, that something is revealed, but what I take to be an unsettled issue keeps him on the fence in the form of the equivocating language he selects. It remains in dysfunction; if the matter here was settled, Ryan would have the instinct to offer up a portrait of a "fully-formed man" that would have resulted from his struggles. But he doesn't, and the poem ends only with the feeling that this is a man who can become weepy because he chooses to be so.
at April 28, 2011