No Country for Old Men

No Country for Old Men, based on the novel by Cormac McCarthy and written and directed by Joel and Ethan Coen , is easily my favorite film of the year, especially surprising because the departing 2007 turned out to be a solid year for American films. Letters from Iwo Jima, Zodiac, Valley of Elah, Breach, Gone Baby Gone, Children of Men , The Assassination of Jesse James by Coward Robert Ford, 3:10 To Yuma and some lesser lights kept the movie going a pleasure, and even the more blatantly commercial and pandering movies I saw, under the excuse of their being guilty pleasures (Live Free or Die Hard, Resident Evil: Extinction) were sure footed 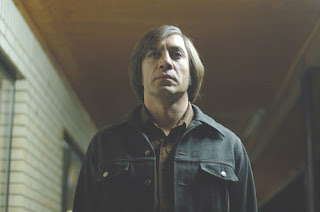 enough in premises and execution to not dilute nor drag down my impression that the lot of us are about to leave a year of unusually good film releases. One does hope that Ridley Scott finds his footing again and can make a film as good as his past successes--Blade Runner, Blackhawk Down, Gladiator--because the glamorized Scarface/Serpico move he attempted with the listless and static American Gangster renews that annoying question you ask yourself when you walk out of his more recent efforts: what was the fuss about him anyway? One would wonder as well when Denzel Washington might lose that nasally wavering monotone that's become his signature vocal tic, or when Russell Crowe might convince an audience again that he can act and not merely memorize his lines and hit his marks.

No Country for Old Men is one of those Coen brothers films that doesn't miss a beat, doesn't miss a trick, and which makes use of each rhythm it invents and each trick it employs in service to the story with the sort of mastery that makes you forget that you're viewing something that was meticulously constructed. Seamless, in other words, as was their Fargo, a comedy that worked in broad, slowly applied strokes of the brush that inspected the ticks and quirks of the characters as they headed for their eventual comeuppance. Hubris is a striking theme in the Coen's movies, and it appears again in their new thriller, where one has the simplest of conflicts, a trailer-living Vietnam vet comes across a bloody drug deal gone bad and tracks down the two million dollars that was meant to seal the deal, and finds himself, through random occurrence, sheer chance and whimsical decision, being tracked himself by a hired killer.


The center of the film are these two characters, the vet (Josh Brolin) thinking he can outwit and kill the stalker seeking to put him on ice, and the killer (Javiar Bardam), a force of nature who cannot die, will not be deterred, detoured or delayed. His character, oddly named Antoine Chigurh ("Soo-gar"),fulfills his task required by the detection of the unwarranted pride a protagonist assumes for himself; he is the force that one does not see coming, that thing that cannot be stopped nor will wait for you. Chaos and carnage are his sole purposes. Brolin's character, named Llewelyn, has no idea what he has decided to go up against, and from here one is aware that the stage is set for the inevitable tragedy that will come and cannot be halted. The Coens have an outstanding sense of being able to slow down and draw out a scene, to have a thumb on the turntable, so speak, as they prolong an agonizingly nerve rattling sequence --Josh Brolin's character is chased across a river by a hell hound pit bull which comes mere seconds from tearing his throat out, a scene causing audible gasps both times I saw the film--and still keep to intrigued with the goings on and the detailed bits of business the characters involve themselves in.


The encroaching despondency on Jones' face as he tells his wife of his dreams, where a wise ass smirk once was now replaced with a tight, brave smile that cannot disguise a man who voluntarily relinquished his grasp on self-certainty, is its own unique tragedy. Only the craggy and creviced face of Tommy Lee Jones could have evoked the inner broodings that tear at the soul, and only his voice, cracked, rough, and choked on dust , could have managed to bring out the melancholy contained in his elliptical monologue without once raising his voice or gesturing wildly. Javier Bardem's virtuoso turn as the psychopath Chigurh , as well, is among the most memorable presences to inhabit the screen in awhile. Self-contained, virtually expressionless, given to odd bits of logic and rituals, he is not a character but a personification of every foul thought of vengeance and fury one has ever imagined in their life. He is not someone you meet, but rather a catastrophe that happens to you and hope you survive.
at December 21, 2007

Email ThisBlogThis!Share to TwitterShare to FacebookShare to Pinterest
Labels: Movies, No Country for Old Men