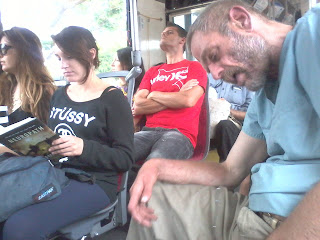 I recall a frustrating  "conversation" with contributor to an online poetry forum who was, to put it nicely, determined beyond all sane measure to say naive and empty headed things about poets and their poems. His resilience was the only thing that was remarkable in this intensely retrograde chat, as  no matter how severely he was corrected, ridiculed,  verbally stomped, even caught and prove to be a plagiarizer, he just came up with more inane platitudes and thefts from other writers. He wouldn't admit when he was incorrect or mistaken ,he stuck to his guns, and something in me rather enjoyed t his man's willingness to be a gadfly for every tired trope and generality he through into the conversation . You know the sort, the little man with the steroid ego who for reasons only God or Homeland Security understand has a habit of internalizing every truism, cliché and new age adage they come across, creating a moldy stew of babble they might think they can get loose women with. It's crazy making. Lately he's said this:

To be a Poet, you must be a Dreamer, for Poetry is the product of our hopes and aspirations.

To be a poet, it helps if one stops making Absolute Statements about what a poet must be or what one thinks is required for a poem to be valid. Above remarks like that make you sorry that anyone spoke highly of Universal Literacy. All a poet needs is a talent for the craft, an interesting way wit the language, and an openness to let the poem they're writing assume a form that is not strained, or made to conform to some specious and dubious requisites ; poetry made to do so is often turgid, vapid, bombastic, myopic and finally gutless when it comes to delivering the goods that the results of good poetic art should, that sound of surprise, the unexpected perception, that inexpressible feeling caught in terms of the unforgettable. It helps as well if one who desires to write good poet not address themselves as Poets, with a capital "P", lest they mistake themselves for priests, seers, mystics, oracles and all other manor of shaman whose existence is of use only to comic book writers or fakes and layabouts who find the personage a handy way to circulate their malarkey for yet another go around. It's my belief that artists, while engaging their muse and expressing the rush of inspiration through their art, do indeed bring together  unlike things that make for a heady  set of discussions among readers and critics as they try to unpack what is beneath the surface, but it's also my thinking that such artists, and poets in particular, are as clueless as to what the subtler elements of their work means when considered together, or even how they found     their into the work to begin with.  I rather favor the idea that interpretive criticism, the sort of digression that brings art from it's theoretical justification and makes it relevant to otherwise  undiscloseable experience.

There came a question during one of those distracting and always fun bull sessions about matters a particular klatch has a passing knowledge of as to whether contemporary poets are more interested in the eccentricities of the page appearance rather conveying a discernible message. A wide open topic, choice for PBS talk radio shows where a host tosses out one broad thesis after another, letting the dogs sniff it out and tear it apart. Among my group, the wear and tear on the intellect was a minor concern; this wasn't lifting weights. The gentleman who posed the question wasn't a reader of poetry, at least not for pleasure; it was a field he perused so he can gather examples of lexical sin against an enemy he's constructed. Some folks just can't have enough straw men in their lives. Good writing is what I needed to be engaged, I said at last, but the problem was really in the expansion of what "good writing" is. It's not a template applicable in all circumstances, without change. There are infinite variations on a common ground.

There are writers whose works are stunning to look at as a kind of typographical art, but reading them winds up being an insufferable experience, unpleasant not so much because the poems are difficult but more because the writing is just plain awful, being either willfully obscure to disguise a lack of any real feeling toward their experience, or, most typically , for exhibiting an inane, unoriginal and cliché choked sensibility that would never have gotten out of a junior college poetry workshop.In either case, the visual look of a poem is a distraction from the mediocrity of the piece being read. Good writing always matters, and there are many , many wonderful poets whose works have an originality achieved through a mastery of language that fortunately leads us away from the nagging dread that a tactless and unschooled Avant Gard has completely overtaken the conversation.

Good poets , I assume, should in some way be interested in the language they muster up to convey the usually ephemeral essence of their muse; it's the art's stock and trade. Language made fresh, reinvigorated, reinvented-- I have no arguments with anyone who earnestly attempts to make language convey experience, ideas, emotion, or even the lack of emotion, in ways and with techniques that keeps poetry and poetic language relevant to the contemporary world, the one that's currently lived in, but there is a tendency for a good many young poets , fresh from writing programs, to repeat the least interesting ideas and execution of their professors and to make their work obsess about language itself, as a subject. The concern, boiled down to an unattractive absolute, is that language is exhausted in its ability to express something fresh from a imperialist/patriarchal/racist?/individualist perspective, and the only thing that earnest writers can do is to foreground language as their subject matter and investigate the ways in which proscribed rhetoric has seduced us and made our work only reinforce the machinery that enslaves us.

This kind of stuff appeals to the idealist who hasn't had enough living, not enough bad luck, not enough frustration or joy to really have anything to write about, in large part (an grotesque generalization, I know), and it's easy for someone to eschew the work of absorbing good poetry -- Shakespeare, Stevens, Whitman, Milton, Blake, O'Hara-- or learning something of the craft and instead poise their work in non-sequiturs , fragments, cliches, sparsely buttressed inanities, framed , usually, in typographical eccentricities that are supposed to make us aware of the horrific truth of language's ability to enslave us to perceptions that serve capitalist and like minded pigs.

More often, this sort of meta-poetry, this experimental notion that makes a grinding self-reflexivity the point of the work, reveals laziness and sloth and basic ignorance of the notion of inspiration-- the moment when one's perceptions and one's techniques merge and result in some lines, some honest work that cuts through the static thinking and makes us see the world in way we hadn't before. I speak, of course, of only a certain kind of Avant Gard, one I endured in college and have since survived when I found my own voice and began to write what I think is an honest poetry. With any luck, some of these writers will stop insisting on trying to be smarter and more sensitive than their readership and begin to write something that comes to resemble a real poetry that's fresh and alluring for its lack of airs. Others might do us a favor and get real jobs. Others, I think, will continue to be professional poets as long as there's grant money to be had, and will continue in their own destruction of forest land.

It's useful for the poet to remember that what he's experienced and how he brings order, sense, and irony to their stories is better grounds for poetic inspiration than "hopes and aspirations" , quaint and gutless talking points that, truth be told, a reissuing of the lamest and most vulgarity retrofitted cliches. You feel, at times , that the low standard the beginning bard aspires to reach is a matter of law. A surfeit of mediocrity and third rate thinking about the state of the art and and the fuzzy-lens blather that passes for an aesthetic philosophy in it's regard can make you paranoid , if just a little. Too much abstraction might make you assume the universe has switched alphabets on you, while a drought of more challenging work creates a sense that powers behind the scenes have organized their resources to keep the collective intellect on low boil.

The real work of poets is to bring their skill as writers to work through the contradictions, u-turns, diversions and unexpected changes they experience while on their way to achieve their ideal circumstances. The poet desiring to write better verse should ignore advice from poetasters and instead improve their writing. There are no short cuts to becoming the poet readers will continue to read, although that doesn't stop those who know this, myself included, from trying to slide up the banister to greatness. It's a lesson again and again; when the giddiness of the experimentation goes away , one confronts the work with the knowledge that one has written below one's abilities , which leaves only two choices; rewrite or toss the effort out and start over. Poetry is process.
at August 16, 2013