What I Bought at the Used Book Store 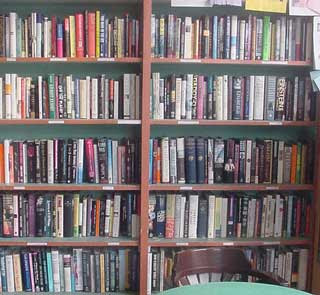 The Gates Of Eden by Ethan Coen , of the Coen Brothers film making team, offers this collection of odd-lug short stories, collected from various magazines from where they've been published previously. Uneven, as with any collection, though there are some nice slices of dialogue, and some potent descriptive writing, but as a film maker, Coen's descriptions of things seem like film treatments at best, hurried and breathless, like the film pitches we witnessed in b The Player, and our laughs are too dependent on our knowledge, even reference, of tired genre forms. But "Hector Berlioz, Private Investigator" is a Philip Marlow/ Sam Spade send up that results in some honest hoots, and 'Destiny" is a particularly vicious laugh at the boxing trade, with a Coenesque hero eating fists over and over as a direct result of his own miserably rationalized choices.

Bear V. Shark by Chris Bachelder is another very funny novel, a real self-reflective, post-modern hoot. Don't let the tag "post modern" put you off, because Bachelder gets it exactly right as he skews his target, television and the culture of Total Media Saturation. Bear V.Shark is a great, wild read for anyone who enjoyed Pastoralia or the work of Mark Leyner. There is a vaguely described though loudly trumpeted Big Event forthcoming that's precisely what the title suggests, in a future time when TVs have no off switches and whose soft ware can sense a viewers boredom and flip the channels for them: TVs are everywhere in this world, in the kitchen, the furniture, bus stops, train stations, and in such a society, the idiom of everyday language is subverted by commercial patois and jingles. America, here, is subtly insane and in a constant state of distraction.

This is the America that Baudrillard absent mindedly ruminated about, only much funnier, edgier, and smarter in the evisceration. Bachelder writes like a master, and there's much to look forward to in his next novel.


Currently finishing A Multitude of Sins, a collection of short stories by Richard Ford. He has the strained relations between men and women falling in and out of love with one another nailed, better than anyone since John Cheever, with a prose that is flawlessly crafted and deeply felt in its economy . Richard Ford is an extraordinarily gifted prose writer whose control of his style is rare in this time of flashy virtuosos , ala Jonathan Franzen and DF Wallace or Rick Moody, whose good excesses run neck-and-neck with their considerable assets. Ford, in his The Sports Writer, Independence Day, and certainly in this collection of Multitude of Sins, understands his strengths in language and advances , seemingly, only those virtues in his work. He obviously understands the lessons of Hemingway , and wisely chooses not imitate: rather, the words are well chosen. For the more poetic language of simile and metaphor, The Cheever influence is clear; the imagery to describe the detail make those details resonate profoundly, as in the last story "Abyss", without killing the tale with a language that's too rich for the good of the writing. His writing is quite good, although the shadow of Hemingway dims the light of his own personality. Ford seems as if he’s made peace with the gloomy and morose code of honor and betrayed idealism that is said to the heterosexual male’s stock and trade. But maybe not just peace; it’s as if he’s cut a deal with the emotional sagging age brings upon his brow, and he cherishes each sour taste and resonating resentment to give his brooding prose the feeling of being more than cleverly disguised metaphors simulating the moral dissolution of a grown man’s sense of situated-nests.

Beasts, yet another new one from Joyce Carole Oates, is short novella about an impressionable young poetess surrendering to a catastrophic seduction by her amoral, decadence-spouting writing professor. Oates doing what she does best, inhabiting a mind on the verge of a breakdown, giving us a personality that translates experience who’s every instance portends disaster. She is not my favorite writer, but this one is convincingly creepy.
at October 03, 2007