Some leftover notes from past poetry offerings in Slate Magazine:

"Riding Westward" by Carl Phillips is an extraordinarily good poem for most of its length, a knowing evisceration of a venerable American icon, a myth stripped of it's power and portent , with nothing left but dress, mannerism, the predictable
slew of cliches;
Compromise his very own shoot-'em-up
tilt to the brim of his hat self, smirk to match,
all-for-love-if-it's-gotta-come-to-that half
swagger,
half unintentional, I think, sashay.

Phillips reads as if he's hung around a few country and western bars and had gotten fairly tired of seeing an endless stream of gas-station buckaroos strut and preen their big hat up and down too many sawdust and spit covered floors to put up with it anymore.

But this poem becomes a ghost story of sorts, an observation of what's left on earth after the power of particular symbols cease of have any real, practical force;

The silver spurs at his ankles where maybe
the wings would be, if the gods still existed,
catch the light, lose it, as he stands in place,
scraping the dirt with his boots: lines, circles
that stop short, shapes that mean nothing—
no bull, not like that, but scraping shyly, like
a man who's forgotten that part of himself,
keeps forgetting, because what the fuck?

What's left is all mannerism, gesture, cults that consist essentially of dress up parties among those in later decades who rummage through the past trying to find or at least construct a useful set of props and stylistic tics with which they can create an identity and hence a purpose. Yet the hats, the boots, the song he sings bemoaning an idealized loneliness under red Western sunsets are iconic and empty; nothing of this comes from the need to survive, but rather the need to belong to something with a fixed certainty.

This is an interesting poem to contrast and compare against Ed Dorn's epic poem "Gunslinger", where the poet reconfigures a series of Western icons into a search for some real matter and meaning beyond what mere language can manage with it's crippling dualisms;it's an anti-epic poem that prefigures many post-modern gestures from its 60s era starting point. Funny, cartoonish, erudite to the extreme, it also locates a tuned lyricism in the Western vernaculars that Dorn uses: the metaphysical aspect of our legends, the sheer questing for answers as Euro-Americans come treading closer to a West coast that will stop them and force them to settle and create lives from dust and ingenuity, comes alive in way that never escapes the zaniness of Dorn's narrating inquiry into the nature of the search.

Phillips takes in the same set of aggregated props and conventional wisdom and sees instead the gaping emptiness beyond the heady glee of being dressed up in the spare vocabulary of personal codes and principled ruggedness. It's all empty and bankrupt, a story we tell to keep the darkness away.

Phillips hints at something more profound than the cosmic silliness he sees with the strutting, posing and atonal warbling of prairie songs: our costumes represent nothing but wishful thinking , and that such thinking is the closet we stand to being transported to a serene, transcendent place. The gods have died, Phillips states, and we are left with our lives to either accomplish something real, or to wander about deluded, reduced by stereotypical narratives of individuality.


It might be said that was impossible to make anger a boring subject for a poem until Aliki Barnstone tried her hand at it. "Anger", Robert Pinsky's selection for the week, is set in situation a good many --too many-- of us recognize as awkward, strained, thoroughly unpleasant, a dinner for two who, sitting presumably at opposite ends of the table as they cut and chew their food with controlled strokes and grinding, manage a language in which they put each other on trial. Each has a turn to outline their argument , to make their case, the casing of civility chipping away with every stroke of knife and stab of fork:

Yet we sit together at the table, each to serve
the other artfully poisoned morsels, point a fork,
and go on and on, watching the widening distance.
This would work, perhaps,if this were a fresher take on a soured relationship, but the poem treads territory that is too familiar, and Barnstone's greatest mistake here is over writing the scenario her template provides. The poem reads like a set up for a knockout punch that does not materialize from the corner she's trying to fight her way out of. It goes on too long, and the device of comparing this meal and its discontents to a trial is less a metaphor than a reason to write further , to add stanzas.

You say, "You should have listened to me,"
and, "But you had to be you, didn't you?"
Then I become the witness who testifies against me.
We deliberate all night, inventing counterpoints,
narrowing our vision at spears of candlelight
and we go on and on, watching from a distance,
as we appeal, go back to discovery, retry, seek
sympathy by recounting suffering and history,
though this defense may deliver the verdict against us:

The prosecutable element would have worked
if it were brief, even fleeting, and if it were a means to segue into something else about the world this couple thought they were living in contrasted the world they now perceive as they relationship, presumably, slowly grinds to a stop. Barnstone might have managed something genuinely poetic if there were a sign , in images, of how the reality has changed. Rather, 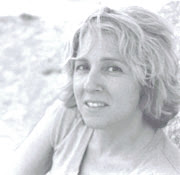 "Anger" reads as if Barnstone were too fascinated with the mechanics of making her -trial conceit work; the poem is damaged by repetition, needless volume. It is a mistake of perception, the assumption that the length of a piece is a measure of it's value.
This length equals a long wait in a doctor's office.

Grating as well is the last stanza, where Barnstone's woman character, the "I" narrator, has a failure of nerve and instead wallows in the misery she and her husband/boyfriend make for each other:
our embrace will pull us down
through the shades, and we'll hold on to our grievances
and go on, too watchful, unable to get some distance,
reading and helplessly rereading the sentences against us.

Who amongst us does want to yell "get your ass out of there"?Barnstone clings to the relationship less for affection than for a reason to continue writing poems like this one. Poems written in bad faith about bad faith give evidence not just of bad, self-pitying verse, but gives obvious clues to an underlying disorder.I prayer is that Barnstone gets a relationship that is everything she desires it to be, and writes a poetry that doesn't reinforce a pathology.
at December 27, 2008