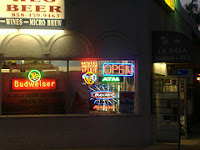 A sampling of some of the smarter things I've written in various internet forums. As with this blog, it's a vanity excercise. At least it isn't a felony.-tb
_________________
Money’s Worth from The Movies

I generally don't walk out of films, not so much hoping that they'll get better and more with the stubbornness of someone who is going to get their ten dollars worth of movie not matter how badly it blows.
-----------------

Rollo May asserts somewhere that pure, sheer, absolute innocence is inviolable, and that until the one that's blessed to be in it's wrap willfully samples knowledge of a grittier world, they will be protected from harm and the ill activities of others. This sounds idealistic, even optimistic to me, and is an aspect of a larger argument -- exactly when did we fall from grace? -- that drips with a nostalgia for better days, before we invented the club and the gun.

The difference between being honest and being naive, maybe. Honesty seems a state of complete awareness about the world, a state where one can peer into the eyes of others and discern real motivations behind the eyes, and in turn trust an instinct that steers them from misadventure and victimization. Honesty is a quality that is earned, a purposeful armor. Being naive, then, would be a choice for being stupid, a refusal to realize materialistic agendas of others who view others not as citizens but as resources to be harvested, stripped, denuded.

Is cynicism is but naivite in another guise? Too encompassing, I think, though it is an easy matter for someone to feign worldliness with sham cynicism: abrupt dismissals of topics with impatience and pat-rants are a handy method of avoiding conversation about things. I don't think they are the same thing, though a cynical person can be naive as well. But same said person may also have a wealth of real world experiences. Saying that someone naive is a statement about their lack of real-world experience, however it gets defined. It means, though, that some conceptions about the way life works hasn't been tested against actual events and that a learning curve has yet to commence about our subject. The cynic believes the world goes only in one direction, is motivated by the worst instincts, but more times , if we have our archetypes clear, it's a world view that's formed after a run of misfortune. At this point one may call the cynic short sighted, as in not taking other things in consideration, but not naive. Ignorant is a better word, as it becomes a willful act after one has tasted the imprecision of real events. It's a refusal to know more, as opposed to a state of not knowing at all.

Getting It, Telling it Like It Ought to Be

Pointing to the phrase or in others words directing ones attention to it is all that is necessary to ascertain its meaning. This is called "reading", a word that is still useful, and the act of reading is itself an act of interpretation. All reading is an interpretive act. The point, though, is when interpretation ceases to be useful to any advance degree and instead exists as an activity meant to amuse the Idle Clever.
In common parlance such special phrases are termed "literal". They have the meaning that is contained in them. One does not need to go outside of them to construct meaning.
Literal or not, one needs to gauge the words in a sentence against the world the words are assigned to describe. Language, being a living activity that functions with a mind and consciousness that must adapt cautiously, in some fashion, to the constantly changing state of Nature, cannot contain meaning that is self-disclosing, absent at least a superficial gauging against the world. Even at the "simplest" levels, a reader constantly goes outside the words themselves to judge their veracity, their usefulness, and hence, interprets the words to come to what sentences mean, in their contexts and their subtler permutations. Interpretation isn't always the circuitous method of the academic, or the specialist: the activity is instinctual, I think, as we use language and change language to accommodate changing requirements and conditions.
-------------

Style, Writing Devices, and the Will to Write Badly

Fiction does not need theory in order to be written. First the fiction is written, the artistic moments, and then theory, or theories, arises as a consequence of critical reading. Theory is a coherent statement of known and verified material facts, in this case works of fiction, and the formation of theory, if it's to be interesting , comes after the appearance of a the primary source. Many pomo critics and erstwhile deconstructionists seek to have theory on the same level as fiction, literature, but in terms of actual practice, theory is a secondary activity, a delayed reaction to fiction, not a simultaneous occurrence.


Changing tastes and fashions have more to do with novels falling off the radar, not an absence of theory. And a philosophy without a theory to begin with is not a philosophy at all, only the same said fashionable chatter. For real philosophies that get dropped into our dirty bin, it's most likely that their systems and suppositions have been supplanted, discredited and sufficiently critiqued into submission, which is just the happenstance of intellectual shelf life.

All bad writing comes from writers who are writing badly, even normally good writers who've undertaken bad projects. There are many tangible reasons for bad writing, not the least of which is the plain truth that the world is full of bad writers who manage to get their scams published. Modernism cannot get "less modern", I think, because the modernism seems, in itself, only a tidying up of Romantic impulses before it, as post modernism seems only a refinement, an updating of some essentially modernist tropes and stylistics. Each age takes the conventional set of dreads and sagas and makes their contours conform to the constructed world of the current moment. What counts is the individual talent that becomes the substance worth talking about.

Even in a post-modernist arena, subject to its slippery laws of equivocation and deferral, the talents that transcend the limits that constrict the names assigned art-making processes and histories are what matter for us. The inclination to have a sharp dividing line between modern / post-modern is arbitrary to the degree that it illustrates the alleged arbitrariness that POMO theorists routinely decry. The distinctions have their merit, and it's important that they are made, but it is in fact a dead end to harp on matters that are distractions and amount to filibustering. The book in question needs to be read before a nominal reader can make a judgment that's useful for discussion. There is nothing wrong with deciding to write in an older mode... so that its tensions may be reinvaded.... Unfortunately this novel fails to do this. In fact it does accomplish this fete cogently, and seamlessly traces the similarities in the matter of Bill Chalmers' nameless malaise in Alan Lightman’s deadpan comedy The Diagnosis and the churning tragedy of Socrates and the assassin Anytus, and it provides that sense of loss that is still a real and inconsolable ache in the heart across the centuries, the tropes, and the communicating technologies. At heart, this is the endeavor of either an avowedly modernist or post modernist: what lies beyond our names for things and their constructions are only the truth of our own instinctual humanity, stripped of language that makes the everyday endurable as a grand narrative we're part of.

Lightman fixes technology as part of the narrative devices that lend the hush of meaning to the daily traffic, and here, beyond high lighting the events of a day life going wrong for routine comedy, links it with habits of a supposedly usable past whose reputed 'purity' of process and perception were no less fallible than the lens of the current period.
at October 28, 2007