Writing and sleeping at the same time 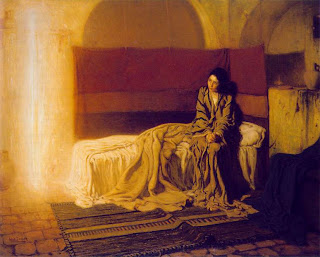 Who hasn't had the experience of dashing urgently into a dark room to do something very important only to forget what that something was once we flip the light switch? It's humbling to have the furniture seem to glare at you as if angry for disturbing their sleep. Likewise, I'd wager more than some of us have dialed phone numbers only to forget who it is we're calling, or, if we do remember the name, the very reason for the contact.

There are two choices in that scenario, hang up and feel stupid for letting your target and topic slip your mind, or stay on the line and, if they answer, bluff your way through the chat, hoping to trigger a recollection with a key word or phrase. Option two doesn't often work , and the attending result is an awkwardness one feels they'll never recover from.

Joanie Mackowski's attempt to describe, declaim and dissect Jean De Flane's 1500 painting of the messenger angel's appearence before Mary to reveal that she is to be the mother of the Son of God makes me think that she forgot her inspiring idea once she entered that particular room of her imagination. The poem, "Bad Annunciation" had a series of flashy notions she wanted to fit into a tightly compressed, succinct poem but forgot what her aim was. The problem for her may well be that she had a bad start on her composition and her determination to make the poem work structurally used up the inspiration it would have required to tie this jointly convoluted and clipped scenario with the unexpected turn that would have dissolved the problematized perspectives and placed this attempt in the reader's mind in a broader perspective. So much telescoping and collapsing of vantage points go on in this poem, that one never knows where they are standing in relation to angels appearing before Mary to announce the coming of the infant Jesus, an element that could be made to work well if Mackowski had better control of the ambiguity in her lines. Her error is conspicuously trying to regain control of the poem,(or enliven it from the deadened sentences she's written) with the clumsy insertion of a mirror trope, with a whole array of referenced representation made to quite suddenly do a the tired little waltz of who-is-watching-who:

at the book, open in her lap. Not the usual book: it's a picture-
book, a museum catalog maybe, Four

Centuries of Annunciations—anyway, it's open
to a dime-sized, dim, and inverted replica of this same

painting here. How clever: a mirror in her lap,
like the pinprick infinite hope just plopped

in her womb.
This is an idea that works well for poets who've that rare skill to take an idea and explore , examine and postulate upon the conundrum and confusions arising when mind/body dualisms are engaged; John Ashberry's Self Portrait in a Convex Mirror comes to mind, as does Wallace Stevens Thirteen Ways of Looking at a Blackbird or Palm Tree at the End of the Mind. The difference with these works and Mackowski's trash -compacted stanzas is that Ashbery and Stevens both harbor desires to merge with the sedate and strange representations of the material world, and imagine new harmony between earthly elements and to bring melody to formations that clashed with each other. The aim, I would guess, was to road test the imagination's limits in how it can provide a buffer and refuge against the grit and grind of a noisy, violent and vulgar reality.

Joanie Mackowski, though, was looking for the exit by the time she came to write those blithely mechanical lines, to bring order to her muddle and provide with a greased slope of rhetorical hat tricks to fast her getaway. But even this was too much work to do, and she leaves this thing in the middle of the poetry superhighway, like a car thief abandoning a boosted ride when it runs out of gas or gets a flat, or when the novelty of the ride starts to bore them.


The angel enters stage left,
as usual, but he brought no flower, just

a spear. Will he kneel? His knees
haven't yet touched the floor. Perhaps he flies

with them bent, to save time. And he's more bivalve
than angel, his wings too rigid and blue, yet to evolve.
She is, to be sure, describing an artist's representation of the famous scene, but there is a question with what she wanted us to consider, what elements we ought to interrogate. It might well be that the aggregation of art and writings about the annunciation over the centuries have made the humanity of Jesus less believable , if we're to regard the angel's bivalve qualities as sufficient reason to say Mackowski considers Christian legend to be an anti-human garble. This ending, better fitting a much longer poem where more has been introduced and twined together with the sort of Ashbery/Stevens genius for long form speculation and trope-exhaustion, does not summarize or bring out buried elements and contradictions in a hard, ironic light, but sounds instead like it's an introduction to a third act, where the reward lies waiting. But this is the room Mackowski rushed into to do something urgently needing to be done; once she flipped on the light, she forget why she was there. And so she left.