The Metaphysics of a Language Buzz: notes on neutralized irony 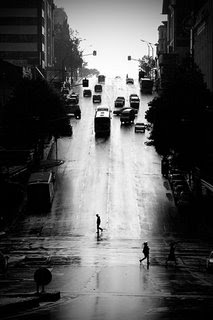 The right isn't afraid to name, nor to advance their cause. There is a living embodiment of political will behind their description the current situation, and it would be Post Modern Tragedy that we've theorized ourselves into submission. The American Left certainly wasn't afraid of offending political sensibilities while there was a Viet Nam war through which the ultimately unprovability of historical determinism could be obscured by a conflict whose obscenity over rode local matters. But with the end of the war, the left here abouts receded to theory, unwilling, I think , to realize something fundamentally decent about Americans and their sense of fairness to the right cause, and it seemed to matter little to the intellectual elite to deal with practical matters of policy , county, state and federal.

The left, in general, became generalized in theory and law, and reduced everything to an eviscerated discourse of euphemistic speech that was not allowed to defile a sense of neutrality: things ceased to have names, only vague descriptions , and in this atmosphere any talk about identifying problems about what sickens the Nation became impossible . Rather than action to change social relations, real practice, a fight for change was reduced to a ideologically perplexed course in etiquette, the practice of which made humans confront each other in ways that were nervous, nervous, ultimately insane.

Gramsci wound up in prison, but he didn't write manuals for non-offensive language in the work place: he never lost his belief that theory needed to stop somewhere, that abstruse descriptions had to halt at the right juncture and some remedy, based on sane analysis, had to be effected. One's knowledge of what produces alienation and states where exploitation is possible needed to be matched with solutions.

"Guts" comes to mind, courage, old fashioned and romantic virtues , but still ways to talk about the world, the city where we might live, and within in, a way to imagine and realize the ways to make it maybe make it more workable than it was then when we entered into it, knowing only hunger and the feeling of cold earth. This is ultimately about discourse: discourse needs to go somewhere, though, needs to have results, because it is about trying to figure what ways there are that we may engage each other in ways that are honest and mutually satisfying, whatever market system you think this goal is possible under. The exact problem with postmodern theory, the intellectual and not the aesthetic texts, is that it's turned into a self-concious wallow (often disguised under the rubric of being "self-reflective") that brandishes the idea that an awareness of it's own social construction somehow advances bold, better human freedom. What it does is make the nominal partisans of just causes weak and immobile, ready to have their own conventional wisdom used against them, as they were during The Miami Chad Trials, by a foe that's true to its own cause enough to use any weapon it can lay its hands on in order to make the world theirs and sterile under one Totalizing God, who, I suspect, isn't likely to have much truck with language theory.

Myths, as well anyone can describe them, are working elements of our personal and social psychology, and whose elements are "modernized"-- better to say updated -- as a matter of course. Declaring a goal to make them relevant to the slippery degree of modernist convention sounds is an insight best suited for a Sunday book review. Jung and Campbell are ahead on that score, and Eliade certainly stresses the relevance of mythic iconography strongly enough: current gasbag extraordinaire Harold Bloom advances the case for mythic narrative ,-- borrowed in part from Northrop Frye (my guess anyway) -- in the guise of literature, constructs the psychic architecture that composes our interior life, individually and as member of a greater set of links: the stuff helps us think ourselves, personalities with an unsettled and unfastened need for a center aware of its adventures in a what comes to be , finally, an unpredictable universe.

Bloom somberly argues that Shakespeare is the fount from which mythic forms find a contemporary set of metaphors that in turn became the basis for our modern notion of dramatic conflict, and argues that Freud's genius lies not in his scientific discoveries, but for the creation of another complex of metaphors that rival Shakespeare's for dealing with the mind's nuanced and problematized assimilation of experience, the anxiety of influence in action, as process, and not an intellectually determined goal to navigate toward. The point is that modernization of myth is something that is that is already being done, a continuous activity.
Structuralism gave credibility to the notion that meaning can be found in the world through language: there is a sense of finality in the thinking , as their project was to create an anthropology that found the submerged structures of culture and language, and in doing so, discover a skeleton key for what our existence means and does. Post-structuralism, gateway to the loose cluster of tendencies and styles called "post modernism", sees the confering of meaning as arbitrary, and links itself rather direly with the school that advances us as instinct driven creatures, laboring under the comfy mysticism of Free Will.

Richard Rorty, in "Contingency, Irony, and Solidarity" defines an "ironist" as someone who realizes "that anything can be made to look good or bad by being re-described" .Are postmodern writers this kind of "ironist"? No more, it would seem , than any other writer scribing under the modernist tenet of "making it new", or to another extreme, 'defamiliarizing" (from Bahktin) recognizable settings , characters and schemes in a language that's meant to provoke readers to see their world in new ways. This is a modernist habit that the new, cubist, cut-up, stream-of-conscious takes on the world will sweep away past aesthetic interpretative models and lead one to a the correct formation of the world-- there remains a faith that language and other senses can apprehend and describe a tangible , material world and capture its complex composition, a "metaphysics of presence" that art can unearth. Irony, in this sense, is usually contained within the story, a result of several kinds of narrative operations coming to a crucial moment of ironic intensity that then drives the story into directions one , with hope, didn't anticipate. Post modern writers start off with the intent of being post modern from the start, and rather than have their inventions gear us for a challenge to see the world in a truer light (contrasted against previous schools of lovely language but false conclusions), the project is to debunk the idea of narrative style all together. Irony is intended to demonstrate some flaws in character's assumptions about the world, a description of the world that emerges contrarily after we've been introduced to the zeitgeist of the fictionalized terrain. Post modern writers are ironists of a different sort, decidedly more acidic and cynical about whether narrative in any form can hone our instincts.
at September 17, 2007