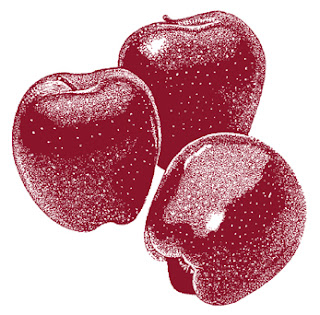 I do enjoy apples, savor them, dice and slice them, eat them enthusiastically and wallow a bit in the crisp and sweet delight that . "Apple Economics", though, is enough to kill my taste for the prized fruit. Edison Jenning's writing misses the the whole savor experience and produces instead a set of regimented lines that neither make sense nor appeal to the senses. It might be that Jennings wants to give the sense of a listener coming into the middle, or the last third of a conversation, with all the signifiers connected to an emotion that was initially expressed at the start of the monologue but which as abated with the on going details.


Though livid and salacious, supermarket Red Delicious
don't deserve the name. But after bagging two or three,
I think of old-stock Staymans that grew behind our house
in weather-beaten, bee-infested rows no one ever pruned,
and all we had to do was reach. I must have eaten bushels' worth while balanced in the highest limbs.

This makes me think of those nauseating camera sweeps you used to see in Sixties adventure series like The Man from UNCLE or I Spy where the lens spins around a crowded terrain in the wan hope of getting in all of the incidental exotica with the fewest shots and manhours with little sense of how coherent the sequence might be. Jenning's method jumps from one stance to another, from euphonious memories of supermarket shelves to backyard harvests, with the only determinant being that apples had to be mentioned in each of the long and otherwise segregated lines.Each sentence seems like the start of a new poem, and I wonder if Jennings has read the notorious Language Poets, in the guise of Ron Silliman particularly. Silliman, an envelope -pushing writer who's unmoored referents are written with a rigorous methodology and purpose , uses images and image-born phrases in long succession that are seemingly separate from the sentence before it and the sentence that follows.Silliman's new collection, Age of Huts, brings together several books he's published as a long standing project. It makes for alterntely exihilerating and exasperating reading. Each line can well be said to be the start of another poem, and although the approach , which foregrounds language as subject matter, and while the aesthetic effect of Silliman's poetry is culminative--there is a cubist perspective that arises when one gets a hint that each of the writer's pieces, nonsequitur that they may seem, have physical locations, sites, real people with whom he's had real conversations, and there is stammering and stuttering rhythm which is oddly musical as he works through his variations of chosen icons--tone appreciates the length to which Silliman has continued his course of examining the dictions and tropes that constitute the way we address our experience in the world.

Jenning's aims are more modest and less successful, chiefly because he seems to want to transgress that troublesome line that separates poetry from prose and so produce writing that has the effect of a collage. The ambition isn't political as is Silliman's, it is nostalgic and quaint. We are meant to take this in as a series of associations , personalized with first person pronouns, as an epiphany, a rush of sensation that is elusive, powerful, and which makes us weak in the knees in the fragmented recollection.

With one hand full of apples,
the other swatting bees, I watched swallows tip
and skim the tree-rimmed skies already hinting cold,
the windfall left ungathered, the fallow years that followed,
and now this bag of garish fruit my memory grafts to vintage
among the rows of grocery aisles that green to fields of praise.

There are not many instances when I would invoke the name of Billy Collins as an example any other poet should emulate, but in this case I think Collins' transparent "writerly" stanzas would have been a perfect match for the ambivalent nostalgia Jennings tried to get across. The failure is what I see as Jenning's willingness to flirt with nonsequiturs to get his feeling across; it reads as arch and stiff, and the worst offense, dull. Collins has the benefit of not trying to be bold or experimental in his verse celebrating the mundane . He might be a hack, but at least he succeeds in what he's trying to get across in a poem. But this is stiff as as a starched brassire, unnatural sounding for an impressionistic chain of autobiographical images; the associative leaps between the lines would be more vivid with a tongue speaking with fewer words one has copied from a thesaurus, to be used in a poem when the muse is ready to motivate an idea. It reads as if it has been worked over, concentrated upon, with new phrases added, deleted, reworked, over-thought. Edison Jenning's would- be tribute to apples sounds forced and unappetizing. Nothing convincing of either apples or his experience of them comes across here, and that's a shame.
at November 23, 2008