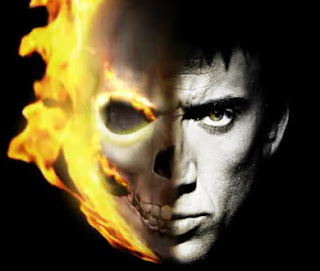 Nicholas Cage continues his uncontested position as Hollywood's worst actor by continuing to involve himself in wretched movies. The most recent atrocity, Ghost Rider, came my way via NetFlix, and it's the most abysmal comic book adaptation I've had the misery of sitting through. In brief, Cage plays a stunt motorcyclist who ,having signed a pact with the devil as a youth, finds himself transformed into the Ghost Rider, who might be considered Satan's bounty hunter and all purpose enforcer and bone faced goon here on earth. That's as much a summary I care to punish myself with by remembering the particulars. Cage's ever-ready Elvisisms are present, but they like the jittery, jerky spaz- attack elan that at least made his past evocations of Presley (as in Face Off and Gone in Sixty Seconds)memorable enough to be made fun of. In Ghost Rider, we seem to watch him as if he were posing for an oil painting; the camera lingers on that face, wide eyed and bug eyed and locked in an inward driven stare that's locked on studying his likeness on a psychic driver's license. The additional flourish of having him, as Ghost Rider, applying the Kirby Hand , ie, the dramatic reaching out toward someone being addressed, fingers splayed dramatically, and holding the arm in position while he monologues the usual virtues of what happens when good versus evil is, doubtless, based on the study of various frames of comic book illustration. This might have been an artful resource,a stylistic tic put to marvelous use by Warren Beatty in his film Dick Tracy, which managed to honor the drawing style of Tracy creator Chester Gould while having the images move fluidly along, briskly, cleanly. Someone here forgot the movies have to move. Even the makers of the other wise horrible Incredible Hulk understood that much.
at August 13, 2007