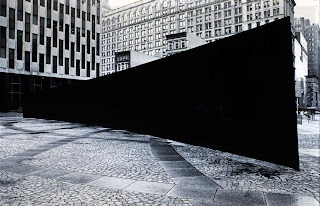 There's a fine slideshow/essay available on Slate about the MOMA retrospective of the career of sculptor Richard Serra. Serra, a former literature major taken with the writings of Herman Melville and Charles Olson who has made his famed , site specific buffed steel formations take on and suggest the movement of waves, ships and motion, is an intriguing subject whose progression from minimalist (one whose ideas and materials scorn ornamentation and leave the problematics of "meaning" at the side road) to maximalist (sizes matters as means of forcing viewers to renegotiate their familiar public areas) is one of the more interesting transformations in contemporary art. The article deals mostly with his successes (which are many and considerable), and talks about his most notable disaster, Tilted Arc.


Those I'd spoke to who had a chance to take a long gander at the Tilted Arc installation before it was dismantled, most of whom instinctually desired to protect artist's rights, in control of content and how it's handled after the work is completed and delivered, found themselves sympathetic with the grousing over the monolithic presence. A large conceit on the part of site-specific artists and architects is to act as philosopher-teachers and ersatz gods of a kind in their percieved need to force people to relate to their landscape or cityscape in different ways; bolstered by soggy progressive notions that the mass of us are encased and buffeted by material objects and the desire to garner more material things before they die, Serra, at turns brilliant and magnificently literate, falls in line with an elitist notion that we need to shaken up and made to see things as they actually are, according to his script.

Often times this succeeds, and a community experiences the marvelous, if somewhat puzzling experience of seeing familiar spaces transformed into something else altogether; hardly so with Tilted Arc, which transforms it's original space for sure, but at the sacrifice of wonder or the desired revolutionizing of the senses.It was an intrusion, an obstacle of arrogant mass, impeding rather than improving the city space it sat upon. Immensity alone, sheer volume of scale, seemed enough for Serra to deliver his metaphor with. It actually diminished one's capacity , whether they be worker or visitor, to enjoy the city scape, as winds got sharper, colder, shadows were longer, the work rested in became darker longer, sooner.
at June 07, 2007