The Rise of the Silver Potato Head 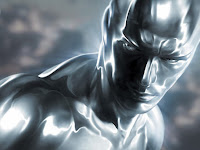 Fantastic Four: The Rise of the Silver Surfer is nearly as unimpressive as the first installment in this comic book inspired franchise, with little to be said in it's favor other than Jessica Alba, as Invisible Girl, looks hot in form fitting clothes, and that the CGI employed to bring the Surfer to life are mighty fine indeed. That leaves an awful lot of time to suffer through,with all the windup zooming, running around, the crashing smashing animation, the mechanically rendered humor following suit in a hurry, a big hurry.You think they're trying to keep you winded, too pooped to look at your watch and leave early. It gets to be as predictable and formulaic as any super hero feature you'd find on Cartoon Network. Andre Braugher, impressive as Detective Pembleton on the sorely missed tv drama Homicide:Life on the Street, is on hand to play a high ranking general with a personal dislike of Reed Richards, alias Mr.Fantastic, who must soldier on with a government orders to enlist his aid in discovering and resolving a mysterious cosmic force that is affecting the earth's weather in unbelievable ways. Braugher, a good actor when given the chance, just looks stern and grumpy here, having little in the way of character to work with. In all this fumbling around, Dr.Doom , supposedly foiled and done for in the first film, is back again, to no one's surprise, but under the guise of cooperating with Richards and the Army to vanquish the problematic Surfer. By now you stop carrying, and wonder how much Lawrence Fishburn, the voice of the animated Surfer, got paid to read what seemed no more than eight lines of dialogue.
at June 21, 2007