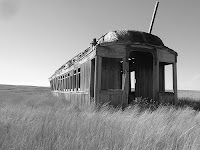 Someone needs to offer the featured poets of Slate's poem of the week some lessons for reading their work over the phone; case in point is Terri Witek's
reading of her selected poem "Civil Twilight",published online in Slate. Her rendition, as is , was lugubrious, ponderous and downright slow, like clogged dial up connections to early Internet fare, but the slight ringing of feedback, the hollow ambiance of someone speaking too closely into a phone receiver proved irritating. One felt as if an oaf was trying to be intimate with you by breathing into your ear. Can the Microsoft engineers devise a better sounding result from the software at their disposal?

Not that it would help Witke's poem much, since it is stationary abstraction that in turn cannot move a single reader's grey matter to cogitate an empathetic response. There's an attraction to writing a poem loosely based on an arcane or mysterious phrase taken from an old text, but one would think the resulting verse would strive to make some sense of the cryptic words by positing coherent questions and underlining ironies that might arise when old instructions--whether technical, moral, or hygienic (or spiritual)
are considered in more recent contexts.

Witke only produces more distance, which would fine if there was a sense of an inward inquiry in play one takes to be occurring in the poems of Elizabeth Bishop or John Ashbery. But that isn't happening.
The poem seems more like lifeless conundrums
uttered as passing sighs in the night, exasperation expressed in groans and half phrases that can't even give clear color to their interior state.

Who arched the bridge to this island of flare-ups?
Which is the key to the hotel of dismay?
Nests blunt the junctions between river and ocean.
I suppose we have done with our mutual heat.

We are meant to consider this in light of the sublime disgust and resignation Eliot gave us with "Ash Wednesday" and "The Waste Land", but Witke hasn't the gift for the pithy phrase making that was Eliot's supreme gift. "Hotel of dismay??"
The poet wants to telegraph the mood, but wooden and trite phrases like that will not suffice.The poem is about one's discontent with a world that does not measure up to private paradigms,but it remains an awkward grumbling at best. Another poet falls victim to their weakest work being highlighted in these pages.
at April 19, 2007