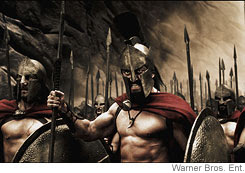 Fans of slick macho adventures (very) loosely based on historical events with a pronounced emphasis on hacking, stabbing and slashing are having a feast with director Zack Snyder of Frank Miller's graphic novel 300. The squabble here is the Battle of Thermopylae, circa 480 BC, where Spartan King Leonidas and a hardened band of his best soldiers head off an invasion of the overwhelming Persian armies. The excess masculinity and historical inaccuracy didn't bother me, precisely because the film is adapted from a graphic novel. Director Snyder, I think, has found the right pitch for the movie version and has, in effect, created something better than Frank Miller's original fantasy.  The results are acutely mindless, with characterization and momentum at a persistent fever pitch and dour tone found in the comics, with the potential allegories to current day debates over Bush and the Iraqi War blurred at best. The point is less to bring awareness to the audience that Imperialism Is Bad than that unchained and uncompromising masculinity is good. Suitably, the intellectual content of 300 comes off as a cartooning of Robert Bly's masculinist screed Iron John. But rather than shudder with the confused mash-up of Spartan history and homoerotic militarism, the movie moves forward with its absurdities, bombast, and swagger with impressive agility. To exploit a cliche further, the battle scenes, though hardly believable, are amazingly balletic in their swerves, dodges and severing connections of weapon to limb and neck; Synder has mastered the rhythm of intersecting slow motion and regular speeds and the constant perspective-changing the latest camera technologies avail him. This does rather well to exploit the perfect forms of the Spartan soldiers, nearly naked save loin clothes, helmets, spears, and spears, hard, sinewy athleticism poised (and posed) to jab, stick, slice. It's doubtless Yukio Mishima would have liked this movie for the amount of time the camera spends scanning the length of one sculpted body after another. 300, however, did not bore. Snyder seems something of craftsman when doling out the excess and the unneeded here; he knows when to stop and move on. He deserves credit for keeping the narrative brisk.
at March 22, 2007